Spain is a good example of how positive public health results go beyond a well established healthcare system. Considered among the healthiest countries in the world, Spain ranks on top when it comes to life expectancy and other related metrics. According to a study carried out in 2019, people born in the European country were expected to live an average of 83 years. The highest life expectancy worldwide stood at 85. Not only is this value higher in Spain than in most other countries, but it has also shown an increasing trend. The figure constantly rose throughout the last decade, with a difference of around three years between 2009 and 2019. An exception took place in 2020, when the COVID-19 pandemic brought life expectancy of the Spanish population back to 2012 values.

What makes Spain one of the healthiest countries in the world?

While some health-related indicators such as the prevalence of tobacco and alcohol consumption in Spain are comparable to other European countries, there are a number of beneficial lifestyle factors that stand-out among Spaniards. With a climate that allows for the growth of a variety of fruits and vegetables, the Spanish population is known for following a Mediterranean diet, notorious for its positive health effects. Other favorable elements, such as enough sun exposure, a walking and cycling culture, and a particularly community-driven society, also prove beneficial to Spaniards’ well-being.

Access to clean water, air, and sanitation also play a role. Safely managed drinking water is accessible throughout the country, and big cities in Spain are less dense than in other parts of the world. Moreover, health is considered a basic right, and the Spanish public healthcare system covers nearly every citizen.

The Spanish healthcare system  is characterized by the coexistence of three different health schemes: the public system, mutual funds, and mutualities. By covering the population through collected taxes, the public system provides elementary healthcare, and allows for financial protection against unexpected health expenses, with an effort concerning the adoption of new technologies, and a strong stand in the area of organ transplants. However, the system faces important challenges, intensified by the COVID-19 pandemic. With budgetary restrictions taking place since the economic crisis in 2009, access to treatment is constrained by long waiting times, and a lack of enough personnel. Along with these limitations, aging generations, and changes on the population’s daily habits, leading to an increase in sedentarism and obesity, are some of the aspects that will need to be addressed in the coming years.
This text provides general information. Statista assumes no liability for the information given being complete or correct. Due to varying update cycles, statistics can display more up-to-date data than referenced in the text.

J. Mendoza
Research expert covering health, pharma and medtech
Get in touch with us now
Published by J. Mendoza, Aug 20, 2021 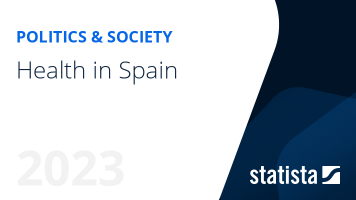 The most important key figures provide you with a compact summary of the topic of "Health in Spain" and take you straight to the corresponding statistics.