Published by
J. Mendoza,
Jul 13, 2022
The first confirmed case of COVID-19 in Spain was recorded in the tourist destination of La Gomera in the Canary Islands at the end of January 2020. During the following days, more cases were reported in various Spanish regions, and infections began to rapidly spread. By mid-March 2020, the country had become one of the epicenters of the pandemic, along with other European nations strongly hit by the outbreak. As the sanitary emergency unfolded, various measures were taken by the government in order to limit transmission, resulting in a first wave being partially contained months after their implementation. By July 2022, around 13 million cases and more than 108 thousand deaths had been confirmed in Spain, with the country still facing an unprecedented increase on cases sustained by the rapid spread of the Omicron variant.

Containment of the outbreak

During the beginning of the pandemic, the fast increase in cases within the country caused an overflow of the Spanish national healthcare system which led the government to declare a state of alarm in March 2020. The decree lasted until June of that year and had to be reinstated from October 2020 to May 2021. During the first dictate, a national lockdown was implemented, and borders were closed. People were allowed to leave their homes only under certain circumstances, such as for buying food and medicines, going to work (essential workers), and in case of emergencies. Practicing sports outside and similar activities were forbidden, and non-essential businesses such as restaurants and bars were closed.

As the number of daily cases began to decrease by the end of April 2020, certain restrictions were lifted. The process was carried out progressively rather than abruptly and in a nationwide level. Eventually, a regional scheme was implemented. The plan was constituted of four phases with a different series of measures that would lead to a new normal. Which phase was put in place at what moment was dependent on various indicators and guidelines, and carried out by each autonomous community. With the rapid development of the pandemic, adjustments of national and local guidelines are constantly discussed..

By the end of 2020 and following a resurge on cases during the autumn season, a vaccine against COVID-19 was authorized by the European Medicines Agency (EMA) for use in the European Union. The mRNA-based vaccine produced by the biotechnology company BioNTech and the pharma giant Pfizer began to be administered in Spain on December 27, 2020. By March 2021, three other vaccines (Moderna, AztraZeneca/Oxford University, Janssen) had been approved for use in the region. As of June 2022, more than 86 percent of the Spanish population had been fully vaccinated against the disease, 88 percent had received at least one dose, and booster shots were already offered.

Find the most recent facts and figures about the novel coronavirus (COVID-19) outbreak in Spain also in Spanish.

In the following 6 chapters, you will quickly find the 30 most important statistics relating to "Coronavirus (COVID-19) in Spain".

The most important key figures provide you with a compact summary of the topic of "Coronavirus (COVID-19) in Spain" and take you straight to the corresponding statistics. 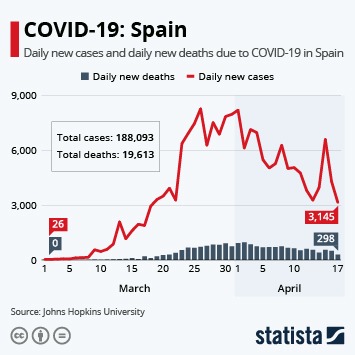