Published by
Lionel Sujay Vailshery,
Feb 7, 2022
Cloud computing, a globally growing market both in size and significance, is the delivery of computing services to customers via the internet. In Europe, the cloud computing market is worth 63 billion euros in 2021 and forecast to reach 560 billion Euros by 2023. Products and services offered to customers may include compute, storage, analytics, networking, or developer tools, and can help organizations save costs and scale faster. The three main service types include software as a service (SaaS), platform as a service (PaaS), and infrastructure as a service (IaaS), each of which offers different degrees of control and responsibility to address customer needs.

European cloud providers are Deutsche Telekom, OVHCloud, Orange, and a large number of regional cloud and hosting companies. Spending on cloud computing is also increasing among European businesses, as they seek to accelerate their digital transformation and remain competitive. The largest share of the market, however, belongs to the three United States-based hyperscalers Amazon Web Services (AWS), Microsoft Azure, and Google Cloud, which account for more than 65 percent of the regional market.

Notably, the strong presence of the hyperscalers in the European market led to concerns among both politicians and European cloud providers. One reason is that data security has increasingly moved center-stage in terms of organizations’ cloud journeys. This is due to the fact that most of the data that is generated in the European Union sits in data centers in the United States, where different regulations apply. For this reason, the GAIA-X initiative has been initiated to generate a secure data infrastructure that seeks to establish European data sovereignty.

In the following 5 chapters, you will quickly find the 33 most important statistics relating to "Cloud computing in Europe". 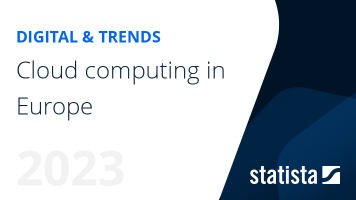 The most important key figures provide you with a compact summary of the topic of "Cloud computing in Europe" and take you straight to the corresponding statistics.

Infrastructure as a Service (IaaS)

Platform as a Service (PaaS)

Software as a Service (SaaS)