Published by
Alexandru Arba,
Oct 11, 2022
Japan has plenty of theme parks and amusement parks, among which several are world-famous, including Tokyo Disneyland, Tokyo DisneySea, and Universal Studios Japan in Osaka. Tokyo Disneyland and DisneySea in particular are tourist attractions, drawing in large visitor numbers every year. The amusement park industry infrastructure is well-developed, and facilities are numerous, resulting in tens of millions of annual visitors to amusement parks and theme parks throughout the country. The market size of the amusement park industry saw continuous increases during the past decade. The advent of the COVID-19 pandemic placed hardships on the industry as facilities had to close their doors for extended periods. Revenue generated at amusement and theme parks shrank in pace with the number of visitors.

The industry differentiates between amusement parks and theme parks. Theme parks and amusement parks share the same objective of providing customers with entertainment, wonder, and joy in exchange for monetary gains. Their approach to doing so is slightly different. Attractions and structures in theme parks are in line with certain central themes. Such parks have a background setting that pervades the entire facility and the content presented. Leading theme parks in Japan, such as Tokyo Disneyland, attract millions of visitors each year. Entertainment at amusement parks tends to be less focused on the background story, instead providing thrill or amazement through rides, gadgets, games, and events. Leading amusement parks in Japan include Suzuka International Racing Course and Yomiuriland.

Who is visiting amusement and theme parks?

Amusement parks and theme parks in Japan attract customers of all ages. At Tokyo Disneyland and Tokyo DisneySea, for instance, numbers relating to the age distribution of visitors show that the share of people under the age of 18 surpasses 20 percent, while the majority of visitors is between 18 and 39 years old. Data relating to the gender distribution of visitors at these two facilities suggests that amusement and theme parks are more popular with girls and women, as 70 to 80 percent of visitors in the years during the past decade were females. On a different note, the proximity of visitors to the facility seems to be an important determinant for visits. In the Disney facilities in Tokyo, over 80 percent of guests came from the surrounding Kanto region, of which Tokyo is also part. With increasing distance from the facilities, the number of guests tended to become smaller. Despite international fame, the overwhelming majority of park guests at Tokyo Disneyland and Tokyo DisneySea were domestic, with international visitor numbers being negligible.

In the following 6 chapters, you will quickly find the 32 most important statistics relating to "Amusement parks in Japan". 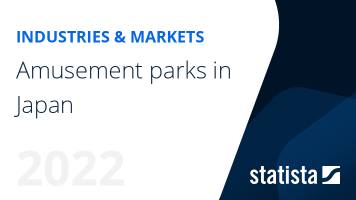 The most important key figures provide you with a compact summary of the topic of "Amusement parks in Japan" and take you straight to the corresponding statistics.

Art and culture industry in Japan