Amusement and theme parks have become popular attractions for diversion, fantasy and a bit of thrill. They are also big money makers. In the United States, the revenue generated from amusement and theme parks is forcast to amount to over 22 billion U.S. dollars in 2019 and this is expected to continue to rise in the future. Both theme and amusement parks offer rides and attractions, however, theme parks are differentiated by having a consistent topical focus, such as Disneyland or Holiday World.
While there are amusement parks which date back long before the opening of Disneyland in the 1950s, it was Disneyland that popularized the idea of the theme park which has since become a model for other parks around the world. Disney Parks and Resorts continue to dominate the industry when it comes to revenue generation, but other companies are gaining in popularity. The concept and its application has spread beyond the United States to Japan, China, France and more.

As of 2019, Magic Kingdom (Walt Disney World) which is located in the United States was the most frequented park in the world, but amusement parks in Japan and China are also gaining attendance.

Revenue of the Walt Disney Company in 2022, by operating segment 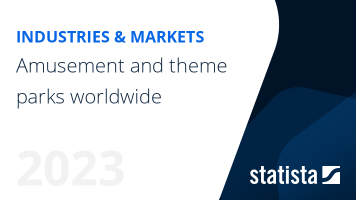 The most important key figures provide you with a compact summary of the topic of "Amusement and Theme Parks" and take you straight to the corresponding statistics.

Amusement and Theme Parks in the U.S.

Amusement and Theme Parks in Canada

Parks
Amusement and theme parks in the United Kingdom (UK)