Published by
Alexandru Arba,
Oct 18, 2022
Japanese arts and culture encompass a broad variety of elements. Japan has a rich cultural heritage on the one hand, while on the other hand, contemporary works of art (especially in the visual arts but not exclusively) have gathered worldwide attention receiving critical acclaim. Products of art and culture can be divided into traditional and contemporary works. Many famous traditional performing arts have survived to this day, such as Kabuki, Noh, or Kyogen, and are still comprising a relevant market share of the performing arts industry. These crafts were mostly created independently from European influences before and during the period of national isolation (1639-1854).
Contemporary Japanese art is often a blend of influences from traditional art and influences from Western art that was introduced during the westernization movement in the Meiji Era (1868-1912). Manga, for example, is said to have originated from an admixture of Japanese woodblock prints (Ukiyo-e) and European caricature. In recent years the anime industry has expanded significantly, tapping into the global demand and has become one of the most important pillars of the Japanese arts and culture industry.

Traditional arts carry significant weight in the Japanese art scene, especially in craft skills and live entertainment performing arts. Crafts such as lacquerwares, ceramic art, and Japanese-style paper (Washi) have been passed down from one generation to the other and assisted in regional industrial structures. Traditional entertainment, such as the court music Gagaku which utilizes ancient Japanese musical instruments is performed at shrines and temples as well as at ceremonial occasions at the Imperial Household Agency. Kabuki, which was popularized in the 1700s, is performed in the form of drama or dance performances in theaters across the country and is one of the most popular traditional performing arts, attracting large audiences. The popularity of calligraphy, strategical board games such as Shogi and Go, or Japan’s “national” sport Sumo, all of which have deep traditional roots, are further examples that show the richness of Japan’s cultural heritage and its importance to this day in Japanese society.

Art and culture preservation and promotion

The Agency for Cultural Affairs, which was formed as a subsidiary body of the Ministry of Education, Culture, Sports, Science, and Technology (MEXT) in 1968, is responsible for arts and culture-related measures and promotion in Japan. The cultivation of successors and the passing of skills is a crucial issue for all “living” traditional arts. To ensure the transmission of traditions and protect cultural heritage, the Agency for Cultural Affairs in Japan provides multiple funds for various projects aiming to maintain inherited cultural assets and skills, as well as to create and develop art, and nurture talent that is capable and willing to pass on knowledge to future generations. For the fiscal year 2021, the annual budget of the agency surpassed 100 billion Japanese yen. There are many other agencies, public and private, such as the Japan Arts fund, that are getting involved to keep Japan’s vivid and multi-facetted cultural heritage alive. This commitment to culture and arts is important, especially during COVID-19 times. With the advent of the pandemic, performing arts renditions, in particular, were negatively affected, as the number of live entertainment performances during the past two years suggests.

In the following 7 chapters, you will quickly find the 42 most important statistics relating to "Art and culture industry in Japan". 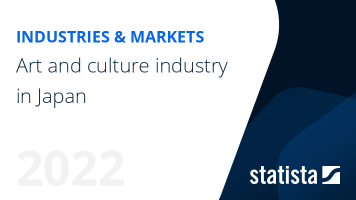 The most important key figures provide you with a compact summary of the topic of "Art and culture industry in Japan" and take you straight to the corresponding statistics.