Fixed broadband is an important part of the Spanish telecommunications market, a market that is the result of a market liberalization process, followed by significant investments in the country’s telco infrastructure. This has seen a general increase in broadband penetration in Spain over the past several years. In 2020, the Spanish telecommunication sector generated revenues worth over 32 billion euros, approximately two billion euros less than the revenues recorded in 2017.
A fixed broadband internet connection is characterized by a high-speed data transmission to a fixed location – such as a household, or a company. Essentially, it is always available. This data transfer occurs through a variety of technologies - like cables, DSL, fiber optics or wireless. While the revenue of the mobile broadband internet in Spain increased at a rapid pace, peaking at 5.47 billion euros in 2020, fixed broadband internet maintained similar revenue values over the last years.

The Spain Digital 2025 plan was drafted - according to the Digital Strategy of the European Union – with the purpose of enhancing the country’s digital transformation process. Spain Digital 2025 will start by implementing several governmental reforms until 2022, meant to attract public and private investments, worth approximately 70 billion euros. One of the most important points of the document was illustrated in the Plan for Connectivity and Digital Infrastructures and the Strategy to Promote 5G Technology, which guaranteed digital connectivity throughout the entire country by 2025, with a speed connection of 100Mbps.
The Plan will receive public funding worth over four billion euros. In addition, the Spanish Government expects national telecommunication providers to contribute with investments of 24 billion euros for the development and implementation of both fiber optic infrastructure and 5G technology. On another note, the forecast for deploying 5G enhanced mobile broadband will be at over 14.3 billion euros by 2040.
This text provides general information. Statista assumes no liability for the information given being complete or correct. Due to varying update cycles, statistics can display more up-to-date data than referenced in the text.

Broadband connections in Spain 2005-202, by sector

Fixed broadband market share in Spain in 2021, by provider

Forecast of the internet user penetration rate in Spain 2015-2025 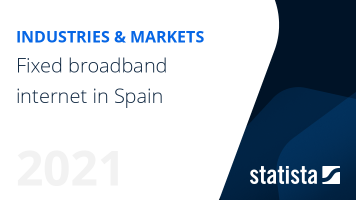 The most important key figures provide you with a compact summary of the topic of "Fixed broadband internet in Spain" and take you straight to the corresponding statistics.