Published by
José Gabriel Navarro,
Apr 27, 2022
Peru is among the largest pay TV markets in Latin America, placing fifth in the region by number of cable subscriptions as of 2020. The segment experienced a boom throughout the past decade. Between 2011 and 2020, pay TV revenue in Peru grew by more than 115 percent. The only decrease recorded in that period was in 2020. Amidst the COVID-19 outbreak, the industry's revenue declined by 2.7 percent, amounting to 1.81 billion Peruvian soles. Still, pay TV's average revenue per user in Peru has trended up. The figure added up to 79 soles in 2020, the highest average since 2012.

Three international companies concentrated about 90 percent of the pay TV subscriptions in Peru in the third quarter of 2021. They were: Telefónica, from Spain; DirecTV, run by Buenos Aires-based Grupo Werthein; and Claro, part of the Mexican telecommunications giant América Móvil. However, their market share changes according to the technology users adopted. The overall leader, Telefónica, accounted for an even greater share of cable TV subscriptions – over 75 percent. By contrast, DirecTV alone concentrated more than three-fourths of the satellite TV subscriptions in Peru. Yet cable is more popular and, therefore, a more diverse subsegment. Roughly three out of four pay TV subscribers in Peru were cable TV customers.

The household penetration rate of pay TV in Peru has slowly trended down since it peaked at almost 25 percent in 2018. In the third quarter of 2021, the share stood just below 21 percent. The usage rate per person is even lower. Between 2005 and 2021, there were never more than eight pay TV subscriptions per 100 inhabitants in Peru. The low percentages suggest that there might still be new potential customers, despite the recent decline. There is also a high contrast between Lima and the rest of the Peruvian territory. The concentration of people in the capital makes Lima the department with the most pay TV subscriptions in Peru, accounting for around 54 percent of all connections throughout the country. A market expansion would likely follow in the event of a more evenly distributed population of pay TV subscribers.

In the following 4 chapters, you will quickly find the 22 most important statistics relating to "Pay TV in Peru". 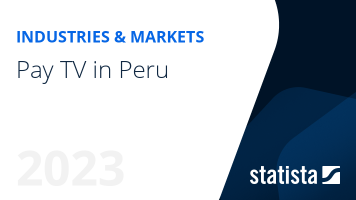 The most important key figures provide you with a compact summary of the topic of "Pay TV in Peru" and take you straight to the corresponding statistics.