As the digital population of Italy keeps increasing, and as younger users start engaging with online environments, social media usage in the country will continue growing. As of January 2022, Italy counted almost 51 million active internet users, 85 percent of which were also active social media users. The number of social media users in Italy is forecasted to experience moderate but constant growth in the next year, reaching over 46.5 million by the end of 2026.
Between 2020 and 2021, the global coronavirus outbreak caused social media adoption to skyrocket, and as the trend appears to be normalizing, users who hopped on social media in the past two years will keep themselves connected: By 2026, social platforms in the county will have acquired a population reach of 78 percent.

While linear TV still retains a stronghold among Italian audiences, online entertainment and social networking occupied eight percent of digital users’ time spent with media in 2021. Social media are undeniably one of the favorite digital environments in Italy, with users spending a large amount of their online time being social online. In February 2022, Italian users spent almost 17 hours per month online interacting with member communities like social networks, and an additional 11 hours chatting on instant messaging platforms. Liking content and sending private messages to other users appeared to be the most common social media activities, with over six in 10 users in Italy reporting engaging in these activities while visiting social media platforms. Posting content such as photos, videos, comments, and status updates appeared to be less popular activities, but only eight percent of Italians reported using social media only passively.

Meta platforms consistently rank as the most used social media platforms in Italy. While mobile users in the country presented one of the highest usage rates for messaging and chat app WhatsApp, as of the end of 2021, market leader Facebook was used by almost eight in 10 Italians. The web version of the popular social media platform had the highest market share in Italy, with almost 82 percent of all social media visits being directed to Facebook as of February 2022. Instagram, which reported approximately 29 million users as of March 2021, was the second most popular social media for users in Italy. In 2021, the Meta-owned photo and video sharing platform had a reach of over 76 percent among young users aged between 14 and 29 years old. In March 2022, the gender distribution of Instagram users in Italy was balanced, with approximately 51 percent of users on the platform being women.

Social videos were also among the most engaging type of content Italian users researched on the internet, with YouTube reporting a reach of 95 percent of internet users at the beginning of 2022. TikTok was also among the most popular social video platforms in the country, with approximately 2.7 million monthly active users engaging with its short-video content in January 2022. Khaby Lame, the most popular Italian content creator on TikTok to reach worldwide fame, counted 75 million global followers as of June 2021.

Additionally, while live streaming videos are not the most popular content, with less than three in 10 internet users reporting watching this type of videos s of the third quarter of 2021, the most popular Italian-language streamers on Twitch can still count on sizable audiences. As of January 2022, Twitch streamers POW3Rtv reported over 1.7 million followers, while second-ranked ilMasseo had over 1.5 million Twitch users engaging with his live content.
This text provides general information. Statista assumes no liability for the information given being complete or correct. Due to varying update cycles, statistics can display more up-to-date data than referenced in the text.
Published by S. Dixon, Jun 27, 2022 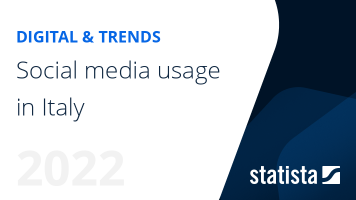 The most important key figures provide you with a compact summary of the topic of "Social media usage in Italy" and take you straight to the corresponding statistics.