88.9k
In the past few years, as financial markets went through tumultuous times, the internet brought forth a new way for individuals and companies to raise funds. Crowdfunding platforms such as Kickstarter allow creative minds to introduce their ideas to the public and to collect funds from many small contributors.

Crowdfunding passed a couple of significant milestones last year. In January 2012, the Elevation Dock, an iPhone dock made from solid aluminium, became the first Kickstarter project to raise more than $1 million. Four months later, Pebble, a watch that connects to smartphones through Bluetooth, became the first crowdfunded project to pass $10 million in funding. Both the Pebble and the Elevation Dock have started shipping by now, proving that crowdfunding has the potential to turn ideas into actual products.

In 2012, the total volume of funds raised through crowdfunding grew 81 percent to reach $2.7 billion. That’s according to data published by massolution, a research firm that specializes in crowd powered business. Massolution expects crowdfunding to accelerate even further this year. The company predicts the global total could reach $5.1 billion in 2013, which would be equivalent to a growth rate of 92 percent.

Thus far, crowdfunding is pretty much limited to North America and Europe. Both continents combined accounted for 96 percent of the global crowdfunding volume, with the remaining 4 percent raised in Asia and Oceania. 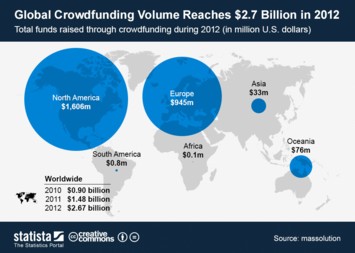 This chart illustrates funds raised through crowdfunding in different regions during 2012.