88.9k
It comes as little surprise that China is North Korea’s biggest trading partner, but whom else does the country trade with? According to The Observatory of Economic Complexity, a leading data visualization site for international trade data, Pakistan (US$27.8 million), India (US$25 million) and Ghana ($11.4 m) are the top export destinations of North Korea after China (US$1.58 billion), which receives more than 90 percent of North Korean exports. Likewise, most imports come from China (US$3.23 billion) but other main partners include Russia (US$74.1 million), India (US$59.1 million) and, surprisingly, Latin American countries Peru and Honduras, which sent small quantities of goods to North Korea (US$9.7 million and US$8.8 million) in 2017.

Exports from North Korea have fallen sharply compared to 2015, from US$2.8 billion worth to only US$1.7 billion. The country still manages to import US$3.2 billion worth of goods, slightly down from US$3.5 billion in 2015.

Compared with numbers from 2015, China is now taking up an even bigger part of imports and exports to and from North Korea, with the share of other countries shrinking accordingly. In 2015, the share of Chinese imports to North Korea was 85 percent, the share of exports China took from North Korea stood at 83 percent. Heightened international pressure to stick to the sanctions against the country have been isolating North Korea further, with China becoming the sole ally by its side.

North Korea’s main export products in 2017 were textiles (coats and suits worth US$434 million), coal briquettes (worth US$368 million) and molluscs worth US$138 million. 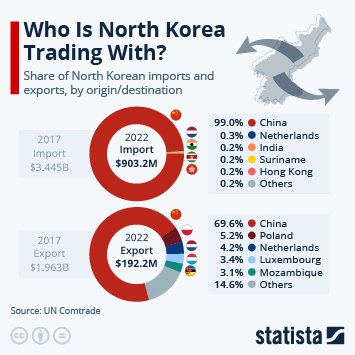 This graphic shows the percentage of imports and exports from North Korea by partner country in 2017.