53k
74.6k
87k
88.9k
Reports suggest that U.S. President Donald Trump will end the Deferred Action for Childhood Arrivals (DACA) program, while giving Congress half a year to find an alternative. Support for keeping DACA has increased and the six months given to Congress looks like a compromise after Republican lawmakers and business leaders (including Tim Cook and Mark Zuckerberg) put pressure on the president to keep the program.

DACA was created through an executive order signed by Barack Obama in 2012 and it offers deportation relief to thousands of young illegal immigrants under the age of 16 who are referred to as "Dreamers". Under the program, they were given the chance to remain in the U.S. to study and work, provided they met certain conditions such as passing an FBI background check, having no serious criminal convictions and either being enrolled in or graduated from high school. The U.S. government then defers any deportation action for two years and the benefits can be renewed.

Since the program was created, nearly 790,000 young illegal immigrants have enjoyed deportation relief with 800,000 renewals being issued since 2012. Even though "Dreamers" only represent a fraction of the estimated 11 million illegal immigrants in the U.S., Trump outlined his intention to deport all of them during his run for office.

Out of all U.S. states, California has approved the most DACA applications by far - 222,795. Texas is in second place with 124,300 and Illinois comes third with 42,376. According to U.S. Citizenship and Immigration Services, Mexico accounts for 70 percent of DACA applications with 618,342 approved to date. El Salvador is in second place with 28,371 while Guatemala rounds off the top-three with 19,792. 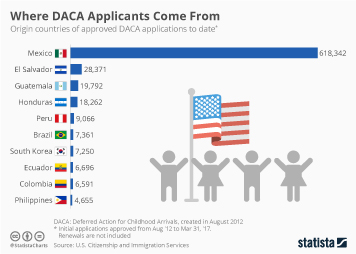 This chart shows the origin countries of approved DACA applications to date.

Immigration to the U.S.