On November 8, 2016, Donald Trump was elected 45th president of the United States of America. One year in, there is at least one thing most people can agree on: Trump's presidency has been nothing short of exciting - for some in a positive way, for others more negatively. In any case, many people seem to find it hard to stay neutral towards anything the president says and does - and it seems nobody can predict what will happen next.

While the “Grab ‘em by the pussy” comments and his remarks on French First Lady Brigitte Macron were heavily criticized, by both Republicans and Democrats, a variety of political hot topics he has touched upon have intensified the polarization of Americans. This is also reflected by Trump’s approval ratings, swinging somewhere between 45 and 35 percent, as figures published by research institute Gallup show.

Trump’s approval rating peaked at 45 percent in January 2017 when he was inaugurated. Ever since, it has gradually but steadily fallen to its current low of 35 percent, according to Gallup.

This could be due to special investigator Robert Mueller’s probe into Trump’s alleged ties to Russia gathering momentum, prompting more Americans to disapprove of his politics. Before former campaign advisor George Papadopoulos recently admitted to having lied about Russia’s involvement in the 2016 presidential campaign, Trump had already caused heated discussions about a variety of issues.

His immigration policies, including the travel ban for Muslims and temporarily shuttering the refugee program, as well as ending DACA stirred controversy. The high fluctuation among White House staff added to the chaos, especially the manner in which former communications director Anthony “the Mooch” Scaramucci was asked to leave after only 10 days in office.

Let’s also not forget Trump's remarks about North Korea at the UN General Assembly, threatening to “totally destroy” the communist country if it dared to threaten the United States. Neither should we leave out the president's not-so-neutral comment on the protests in Charlottesville, when he claimed that there was “blame on both sides”, in effect not taking a clear stand against white supremacists.

It almost seems like stirring up controversy is part of President Donald Trump’s political agenda and the list of controversial issues will keep growing. But for now, we will stop here in eager anticipation of what might happen next. 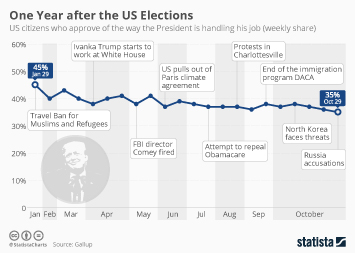 This chart shows weekly share of US citizens who approve of the way the President is handling his job (Jan to Oct 2017).