Skip to main content
53k
74.6k
87k
88.9k
Earlier this week, more than 100 American business leaders, including the CEOs of most of the country’s largest companies and several powerful industry groups, signed a letter addressed to Congress, urging lawmakers to find a legislative solution to secure the future of hundreds of thousands so-called Dreamers. Currently protected under the Deferred Action for Childhood Arrivals (DACA) program, which was established by Barack Obama in 2012 and grants young people who came to the U.S. illegally permission to stay and work in the U.S. without offering a pathway to citizenship, Dreamers face an uncertain future (i.e. deportation) after the Trump administration ordered an end to DACA in 2017.

“We write to urge the new Congress to act immediately and pass a bipartisan, permanent legislative solution to enable Dreamers who are currently living, working, and contributing to our communities to continue doing so”, the letter reads, adding that Dreamers “are our friends, neighbors, and coworkers” and urging Congress to “pass a law to provide Dreamers the certainty they need”. The letter, put forward by the Coalition for the American Dream, cites bipartisan studies estimating the economic loss associated with a possible end to DACA at $350 in lost GDP and $90 billion in lost tax revenues, not to mention the hardship it would cause for the roughly 700,000 young people currently protected by the program, who have lived in the U.S. for most of their lives.

As a study conducted by Tom K. Wong of the University of California, United We Dream, the National Immigration Law Center and the Center for American Progress shows, DACA has been very effective in improving the living situation of those protected by the program. 57 percent of DACA recipients surveyed got their first job after their application was approved and 62 percent pursued educational opportunities they previously couldn’t once DACA gave them a legal status. According to the study, 89 percent of Dreamers are currently employed and nearly 75 percent of those who are currently enrolled in school are pursuing a bachelor’s degree or higher. 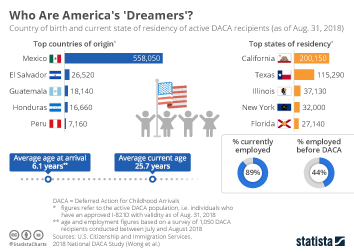 This chart shows figures related to approved DACA applicants as of 2018.