In the United States, the Department of Education has stated that undocumented students, including those eligible for DACA, will not be able to avail of emergency coronavirus stimulus funding amid campus closures caused by the pandemic. Last month's CARES Act provided a $12 billion boost in education funding which will be split between institutions and financial relief for students, though it was unclear about who exactly would be eligible.

The news that undocumented students are exempt will impact hundreds of thousands of learners. A recent report by New American Economy, a bipartisan research and advocacy organization, has found that there are far more undocumented students enrolled at U.S. universities than previously thought. In 2018, there were an estimated 454,000, of which 216,000 were DACA eligible, the majority of whom came to the U.S. as children or adolescents and attended primary/high school.

Reports have shown that undocumented immigrants, including DACA recipients, have paid taxes, started businesses and worked in industries facing labor shortages while playing an important role in their communities. Undocumented students actively ready themselves to fill critical skills shortages and according to New American Economy, they include "healthcare, STEM fields, teaching, and business".

The pandemic has shown this firsthand with undocumented immigrants filling important roles in healthcare, delivery services and agriculture among other industries. As this infographic shows, California is going to be the state where the most undocumented students are impacted. The report estimates that it has 92,000 while Texas and Florida are in second and third place with 66,000 and 42,000 respectively. 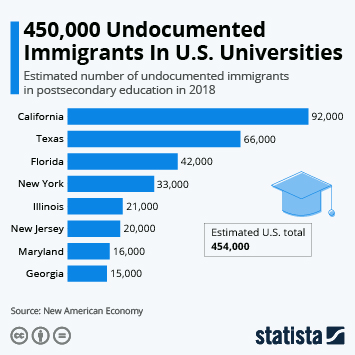 This chart shows the estimated number of undocumented immigrants in postsecondary education in 2018.

Challenges Faced by the United States