Halloween is considered the spooky season, and while skeletons and haunted houses can be scary, it's different things that keep Americans up at night. A survey by Chapman University in Orange county, California, shows that while some of the fears most commonly cited by Americans changed in the coronavirus pandemic, other stayed the same.

The Survey of American Fears polled 1,035 U.S. adults on their levels of fear across 95 different options. For the fifth year in a row, "corruption of government officials" led the ranking with 79.6 percent of respondents saying the prospect made them "afraid" or "very afraid". The fear of "people I love dying" understandably rose from rank 5 in 2019 to rank 2 in 2020/21, with 58.5 percent of people citing it. The fear of "people I love becoming seriously ill" moved down one spot into rank 4, making room for the newly-added option of "a loved one contracting COVID-19". While fear of illness and death increased, but wasn't new to the top 10, the fear of pandemics and epidemics shot up from rank 31 in 2019 to rank 6 in the most recent survey.

Probably in the context of widespread Black Life Matters protests that turned violent in some U.S. cities in 2020 as well as the Jan 6 storming of the Capitol in Washington D.C., the fear of "widespread civil unrest" increased even more, moving from rank 87 in 2019 to rank 5 in 2020/21. Since the survey was carried out in January of 2021, some participants could have been questioned before the latter event, however.

Interestingly, the increased fears of COVID, economic collapse and civil unrest pushed down fears of climate change from rank 9 to rank 13, now only being cited by 48.7 percent of Americans. Fear of pollution, ranked higher than that of climate change, equally moved down the list.

Fears in the spirit of Halloween were less common. Fear of zombies and ghosts only applied to 9.3 percent of Americans, while 5.6 percent said they were afraid of clowns. The biggest fear that could be triggered in a Halloween celebration is probably that of spiders, shared by 22.8 percent of Americans. 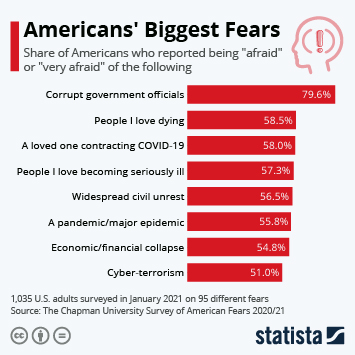 This chart shows the fears most commonly cited by Americans (saying they made them "afraid" or "very afraid").