88.9k
2018 is set to become a game-changing year for consumers, Fintechs and the entire banking sector in Europe. Imagine a pie of financial services, which until now could be eaten exclusively by banks. From January 2018 onwards, new rules come into effect in the entire EU which enables any company offering financial services, from small Fintechs to companies like Google, Apple and Amazon to now get a piece of this pie. For example, as a consumer you have a bank account with BNP Paribas but you would like to use an Apple Watch with Apple Pay for a payment because you find the method a more user friendly option than the one provided by your bank. Or maybe you use Barclays but want to pay for a birthday present for your friend via Facebook. From January 2018, this is all possible. Apple Pay and Facebook, both examples of so-called third-party providers, will then tell your bank to initiate this payment. In short, the new rules, the so-called Second Payment Services Directive or PSD2, enables European customers to use the likes of Paypal, Facebook, Google, Apple, Amazon or any other e-commerce company to take care of your payments and finances. Instead of your bank.

Opening up banks at first sounds good for consumers and competition. Most consumers, however, have no idea yet what PSD2 is or what it is capable of. This could become troublesome, as the Directive also tells banks they are obliged to provide e-commerce companies access to customer data. The idea behind this is to allow e-commerce companies to build financial services on top of banks’ data and infrastructure, as the new third-party providers are better placed to offer all sorts of innovative services. Apps could, for example, offer a one-click option to put unspent monthly income into a pension plan, notify users when they spend too much money on shoes or simply make online shopping easier. But since the data which banks have to share is in essence sensitive financial data, this naturally raises many privacy and data security questions along with consumer uncertainty. 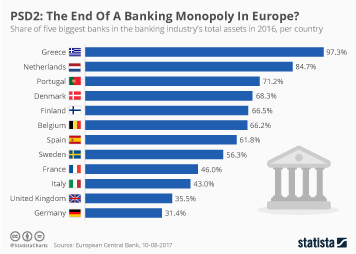 This chart shows the share of the five biggest banks in the banking industry's total assets in 2016, per country.