88.9k
While most Americans know May 1st as May Day, a holiday that once was celebrated with mayday poles and flowers, most people across the world know the day as Labor Day.

The story of how May 1st became Labor Day actually begins in the U.S. in 1886. Workers across the U.S. coordinated a multi-day protest starting on May 1st in multiple cities to agitate for an eight-hour workday. On the second day of protests, violence between police and peaceful protestors broke out in Chicago at an event that became known as the Haymarket affair. By 1889, the International Socialist Conference declared May 1st an international holiday for labor now known as International Workers’ Day.

That held true in the U.S. too, until 1958 when President Eisenhower, reacting to the anti-communist tensions of the early Cold War, signed a resolution naming May 1st “Loyalty Day” to avoid association with the universalist, workers first-language that the day was known for. Loyalty Day is not widely celebrated or commemorated in the United States, while Labor Day in the U.S. occurs during the first weekend of September.

Much like attitudes towards labor have changed over time and place, the current culture around working hours change based on where in the world a worker is employed. According to the OECD in Mexico, the average worker works the most hours a year, putting in over 2,200 hours of labor. South Korea comes in second with slightly over 2,000 hours of work per year. The United States is just 34 hours above the OECD average, while the average German worker enjoys around 1,356 average annual hours of work, 390 hours below the OECD average. 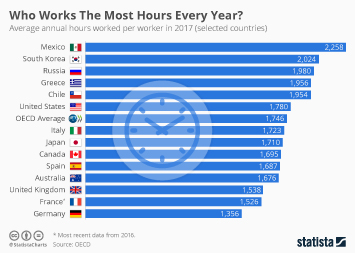 This chart shows the average annual hours worked per worker in 2017 (selected countries).