88.9k
Depending on where you live and your friend circle, the subject of craft beer can prove divisive. It has a large legion of passionate fans who appreciate a product that's made locally, produced in small quantities with high quality standards as well as its sheer diversity. On the other hand, some drinkers dismiss it as an over-priced fad, full of beers with silly names that are mainly appreciated by snobby hipsters and annoying hop connoisseurs. No matter what your view on craft beer is, one thing is clear: the revolution in brewing across the U.S. has become an unexpected economic success story.

For years, the American beer market was controlled by a few powerful players and despite that, small brewers have managed to make immense strides over the past decade or so. They still managed to thrive despite the big breweries attempting to buy-out their smaller independent competitors. That all started 2011 with Anheuser-Busch InBev 's acquisition of Chicago-based Goose Island. The explosion in craft brewing has revitalized neighborhoods, boosted innovation, increased variety and perhaps most importantly, created jobs.

The number of operating breweries increased dramatically in the U.S. in recent years. According to the Brewer's Association, the country had 1,460 of them in 2006 and by 2016, that had grown sharply to 5,301. At the same time, the number of brewery workers went up dramatically, increasing 120 percent between 2008 and 2016 alone. The following infographic was created with Bureau of Labor Statistics data and it shows that 26,274 workers were employed at U.S. breweries in 2007. A decade later, employment levels in the beer industry increased sharply, reaching 69,359. Even though sales have started to slow down, small and independent breweries still contributed an impressive $67.8 billion to the U.S. economy in 2016. 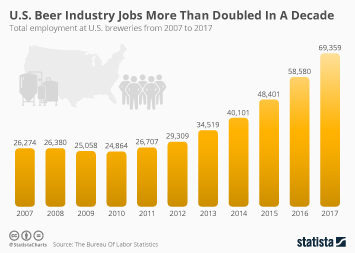 Beer imports to the United States