Published by Jan Conway, Jul 8, 2022
India Pale Ale, Session beer, Imperial Porter, Blonde Ale - the varieties of craft beer styles is nearly endless. Although heavily impacted by the coronavirus pandemic, craft beer still represents the growth segment of the beer brewing industry. From Seattle to Miami microbreweries are revitalizing and reinventing beer as we know it, and industry experts expect the craft beer trend to continue to grow in relevance in the coming years.

After a significant decline in production in 2020, craft beer volume amounted to about 24.8 million barrels in 2021, not quite pre-pandemic levels but well on the way. In terms of brands, Blue Moon, Sierra Nevada, and New Belgium were the top three craft beer brands in the United States.

According to the Brewers Association, the nation's largest craft brew trade organization, an American craft brewer is "small, independent and traditional". Despite the pandemic, the number of operating craft breweries reached all-time highs in 2020 and 2021, with 9,118 craft breweries throughout the country. In that year, California boasted over 900 craft breweries, the most of any U.S. state.

Beer is the world’s most popular alcoholic beverage, and craft beer is trying to capture more of the market. In spite of the growing craft beer sales, light beer is still the most popular beer in America by a huge margin, showing that craft beer has yet to gain mainstream popularity. Beer has also lagged behind other alcoholic beverages in the explosion of e-commerce that resulted from the COVID-19 pandemic. Online beer sales have a penetration rate of just 1.4 percent compared to wine which enjoys a rate of 8.6 percent. The major cause for this discrepancy is beer's comparative lack of availability in direct-to-consumer sales.

In the following 4 chapters, you will quickly find the 26 most important statistics relating to "Craft Beer Industry in the U.S.". 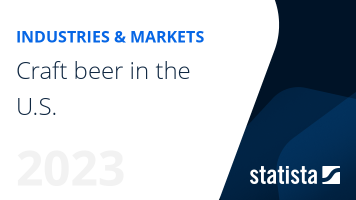 Go to report Craft beer in the U.S.
Top Seller

The most important key figures provide you with a compact summary of the topic of "Craft Beer Industry in the U.S." and take you straight to the corresponding statistics.

Craft beer market in the Netherlands, Belgium and Luxembourg 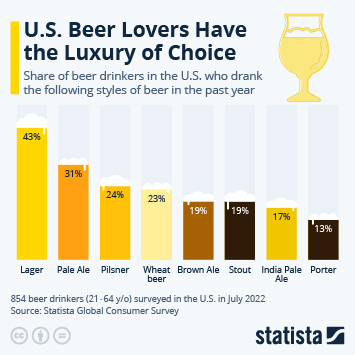 U.S. Beer Lovers Have the Luxury of Choice 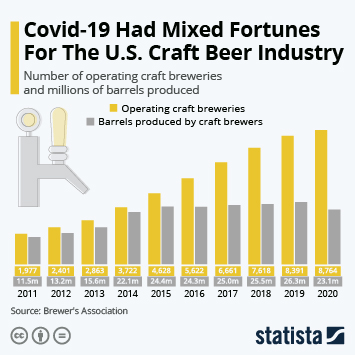 Covid-19 Had Mixed Fortunes For The U.S. Craft Beer Industry