88.9k
Aside from the fact that Spotify is still losing money, there were plenty of positives to take away from the company’s second quarterly earnings report as a public company. When focusing on operational instead of financial metrics, the music streaming company that went public via direct listing earlier this year, makes a compelling case for itself.

First and foremost, Spotify’s subscriber base continues to grow. By the end of Q2 2018, the company had 180 million monthly active users and 83 million premium subscribers. That translates to more than 4 in 10 Spotify users actually paying for the service, up from less than 3 in 2015. Even the launch of Apple Music in June 2015, that many expected to be the beginning of the end for Spotify, doesn't seem to have slowed the service's growth down. “We don’t see any kind of meaningful impact of competition,” the company's CEO Daniel Ek said during an earnings call three months ago. “In fact, when we look at this, we don’t really think that this is a winner-takes-all market.”

Spotify is also doing a great job at keeping its subscribers on board. The company’s premium churn, i.e. the cancellation rate of its paying customers, declined from 7.7% in 2015 and 5.5% in 2017 to below 5% in the first three months of 2018, indicating a high degree of customer satisfaction. 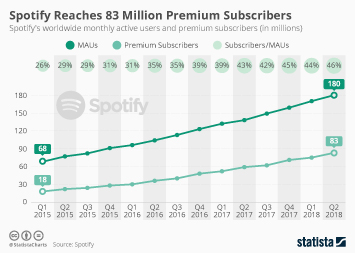 This chart shows the user and subscriber growth of Spotify since 2015.

Digital and analogue music in the UK