88.9k
If you invested in property in the German capital at the turn of the century, you'd probably have a healthy return by now. In 2003, Berlin's mayor, Klaus Wowereit, labeled his city "poor but sexy" due to its low rents and flourishing arts scene. Even though that's still true today, Berlin's reputation as a hub for everything alternative is being threatened by a flourishing real estate market. In fact, property prices in the city have increased 120 percent since 2004 with the relentless pace of growth prompting warnings about a real estate bubble. According to new figures from Knight Frank, property prices have shot up 20.5 percent between 2016 and 2017 alone. That makes Berlin's real estate market the fastest-growing worldwide. Despite that, its commercial and residential property prices remain relatively cheap compared to other major cities.

Berlin is by no means the only German city in Knight Frank's ranking. Hamburg was in seventh place with its property market growing 20.5 percent while Munich and Frankfurt had growth of 13.8 and 13.4 percent respectively. Izmir came second after Berlin with growth of 18.4 percent while Reykjavik, Iceland's capital, came third with 16.6 percent. Iceland's boom in tourism is one obvious reason for Reykjavik's prosperous property market but the primary reason is a lack of supply. Several contractors went out of business after the country's financial crash and in the years since, supply has failed to keep pace with demand. Further down the ranking, New York came 61st (5.6 percent) while London was 101st (2 percent). 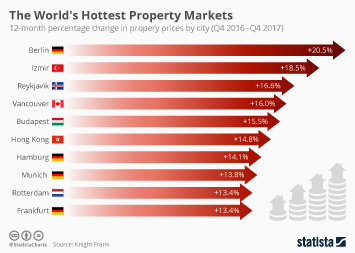