88.9k
When Nike unveiled an ad campaign starring Colin Kaepernick, the face of the athlete protests against racial injustice in the United States, in September, it seemed like there were only two possible reactions. People either applauded Nike for taking a stand and backing Kaepernick who has yet to find a new team in the NFL after opting out of his contract with the San Francisco 49ers in March 2017, or they lambasted Nike for supporting someone who, in their eyes, had disrespected the American flag and U.S. military personnel around the world by kneeling in protest during the national anthem. Some even went as far as burning their Nike merchandise, not without sharing videos of it on social media of course, and vowing never to buy a Nike product again.

While those reactions might seem extreme, it’s important to understand that many people consider brands an important way of expressing themselves and their core beliefs. So while some proudly wore their Nike gear in the wake of the Kaepernick affair, expressing their support of Kaepernick’s cause, i.e. the fight against racial inequality and oppression, others expressed the love for their country by criticizing what they felt was disrespectful of the people fighting for it.

According to a recent report published by Edelman, it is more important (and sensitive) than ever for brands to take a stand. Based on a survey of 8,000 consumers across eight markets, Edelman found that more and more people are what they define as belief-driven buyers, i.e. consumers whose buying behavior is influenced by their beliefs to a certain degree. Across all markets, 64 percent of the respondents were identified as belief-driven buyers in 2018, up from just 51 percent in 2017. Interestingly, the share of belief-driven buyers is highest in China at 78 percent, while it’s surprisingly low at 59 percent in the U.S. 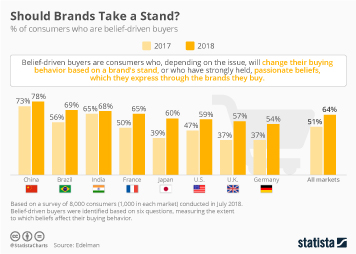 This chart shows the percentage of consumers whose purchase decisions are influenced by their beliefs.