Six months after raising the subscription fee for Prime members in the United States by 15 to 17 percent, Amazon will raise the price for European Prime members as well. On Tuesday, the company started notifying its customers of the price hike that will take effect on September 15. Depending on the market - Amazon charges different membership fees across Europe - prices for European Prime members will rise between 13 percent and more than 40 percent, with members in France, Spain and Italy facing the steepest increases.

Over the past few years, Amazon has in fact added more and more perks for Prime members, including fast and free shipping as well as digital entertainment (i.e. music and video streaming), sports broadcasting and exclusive deals (think Prime Day). But perhaps more importantly, the company is facing ever-higher logistics costs, a trend that will only be exacerbated by high fuel and energy prices.

As the following chart shows, Amazon’s logistics costs have skyrocketed over the past decade, with shipping and fulfillment costs growing almost 40-fold between 2009 and 2021. Last year alone, the company’s shipping costs, which include sortation and delivery centers and transportation costs, amounted to $76.7 billion, with fulfillment costs (e.g. costs of operating and staffing fulfillment centers) adding another $75.1 billion to a hefty logistics bill. While Amazon’s revenue also grew more almost 20-fold since 2009, that wasn’t enough to offset the surge in logistics costs. In 2009, shipping and fulfillment costs amounted to 15.6 percent of net sales. By 2021, that share had risen to 32.3 percent. 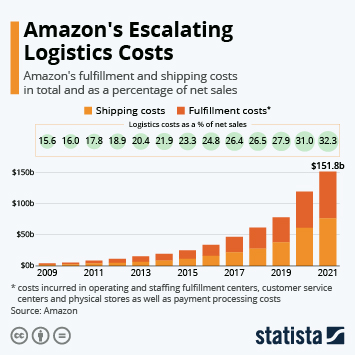 This chart shows the growth of Amazon's shipping and fulfillment costs.