Skip to main content
53k
74.6k
87k
88.9k
Cruise ships are becoming increasingly controversial in Europe and residents of the Italian city of Venice have become especially enraged by the visiting behemoths. Last weekend, 5,000 of the city's residents protested against the presence of cruise ships in the busy Giudecca Canal following an accident between the 65,500 ton MSC Opera and a nearby ferry. There is a long list of reasons for the backlash against cruise ships including serious overcrowding and pollution. It's well known that the giant ships cause enormous levels of environmental damage but a new report has now shown just how dirty they really are.

The shocking data was published in a report from TransportEnvironment.org last week and it found that 203 cruise ships docking in ports such as Dubrovnik, Marseille and Hamburg emitted substantially more SOx during their stay than all passenger cars in those cities for the whole year. SOx is sulphur oxide and it is one of the main pollutants from ships, along with nitrogen oxide (NOx). The following infographic provides an overview of the European cities suffering the worst environmental impact from the cruise industry in 2017.

That year, Barcelona experienced 32,838 kg of SOx emissions from cruise ships while the total amount from all cars in the city only added up to 6,812 kg by comparison. The story is similar nearly all of cruise passengers' favorite haunts with SOx from cruise ships totalling 28,000 kg in Palma in 2017 compared to 2,986 kg for the city's cars. In Venice, where outrage is reaching fever-pitch, SOx emissions totalled 27,520 kg from the ships while cars only totalled 1,362 kg. 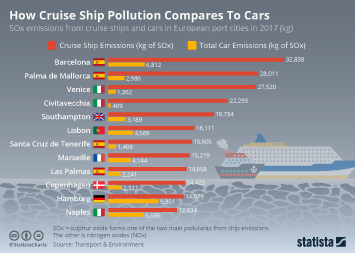 This chart shows SOx emissions from cruise ships and cars in European port cities in 2017 (kg).