88.9k
Technological breakthroughs explode exponentially, with the basics taking a while and eventually innovation picking up and taking off. As the timeline below shows, this is true for the development of the camera and the photos that are produced by them.

The impulse to peer into the natural world has existed for centuries. Many philosophers and mathematicians, between Aristotle and Ibn Al-Haytham, theorized on optics, using the Camera Obscura to view solar eclipses and understand light. By the 1500s people began using the Camera Obscura, or a pinhole camera, to draw images, setting the stage for the basic concept of a photo.

The world—and technology—of the camera and the photo accelerated into the 19th century, developing from lithographic sketches, called daguerreotypes to stable color photos. By 1900, Kodak began selling the first commercial camera, named the Brownie for its compact, rectangular shape.

A half-century later, the speed of photos started accelerating with instant image development. Polaroid pioneered this in 1947. Within thirty years, the beginnings of digital cameras were being created and patented by Steven Sasson. As the world sprinted towards the end of the 20th century, Kodak patented and sold the first digital camera, changing how pictures were stored and visual information was processed.

The change from developing and storing images in film to breaking down bits of pictures into 0’s and 1‘s to be stored on a computer, changed what a camera could be. Camera phones—what is now synonymous for just phone and just camera, not needing either descriptor because the two are intertwined—debuted in 2000. Nearly two decades later, artificial intelligence is changing how digital information can be identified and acted upon, with the development of computer vision and drone technology. 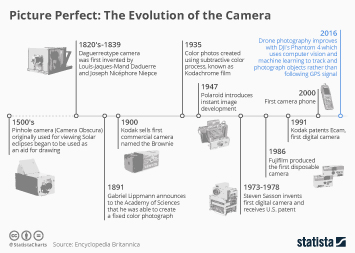 This chart shows the timeline of the camera from the early 1500's to present day.