88.9k
After seven consecutive years of growth, the world’s high-net-worth population, i.e. everyone with investable assets in excess of $1 million, suffered a $2.1 trillion loss in collective wealth in 2018. That’s according to Capgemini’s latest World Wealth Report published earlier today.

Before you break your piggybank to make a charitable donation for millionaires in need, be informed that the decline can largely be attributed to the ultra-rich, i.e. the top 1 percent of the world’s high-net-worth population, who accounted for 75 percent of the total decline in global millionaire wealth. Meanwhile the millionaire-next-door segment ($1 to $5 million of wealth – Capgemini’s terminology, not mine) only suffered a 0.5 percent dip in collective wealth.

According to Capgemini’s estimates, the Asia-Pacific region suffered the biggest declines, with China’s millionaires alone losing more than $500 billion in collective wealth. The Chinese stock market suffered a 20 percent decline in 2018, as measured by the SZSE Composite Index, as trade tensions and fears of a broader economic slowdown dampened the mood in what had looked like an emerging giant in recent years. 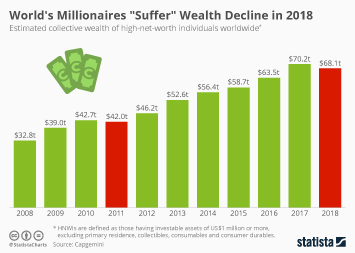