53k
74.6k
87k
88.9k
In the middle of June, President Trump unveiled his plans to completely overhaul Air Force One's paint scheme when he presented printed mockups to ABC News' George Stephanopoulous. Dark blue, red and white, the mockups seemed more than a little bit similar to the livery on Trump's private jet and helicopters from before he took office. The redesign is certainly a radical departure from the current blue, gold and white paint scheme which has been in continuous use since the days of the Kennedy administration. Two Boeing 747-8i aircraft are currently being converted into presidential transports and there is a chance that they will adopt the new livery.

Not everyone is happy with Trump's plans and Rep. Joe Courtney of Connecticut introduced changes to the Pentagon's spending plan which were approved by a House committee. They mean that the president will now need congressional approval for any planned changes to the aircraft's interior and exterior. Alabama Republican Bradley Bryne described that move "as an attempt to poke the president". Turbulence in Congress aside, what do the U.S. public think of Trump's move to ditch Air Force One's iconic paint scheme? A new YouGov poll conducted for Statista found that the majority of Americans are behind Trump's plan to overhaul one of the most recognizable symbols of U.S. prestige on the world stage.

The survey involved 1,246 American adults and was conducted in June 2019. It found that 51 percent of respondents prefer Trump's new red, white and blue design while 32 percent want to keep the traditional blue, white and gold scheme. The current livery came about when French industrial designer Raymond Loewy labeled a prior design "gaudy" and "amateurish". When Jackie Kennedy found out about the criticism and knowing that the presidential aircraft served as an important first impression of JFK, she convinced her husband to hire Loewy to commission a redesign. The blue, white and gold has been in use ever since and given that the Air Force has said there will be no decision on Trump's new design until 2021 (after the next presidential election), there is still a chance that it could remain in place for a long time to come. 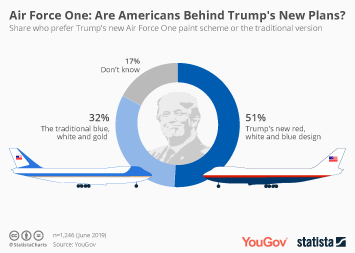 This chart shows the share who prefer Trump's new Air Force One paint scheme or the traditional version.