88.9k
As the decade draws to a close, the rise and fall of ISIS has undoubtedly proven one of the biggest stories of the 2010s. After years of bloody fighting, the terrorist group lost its last pocket of territory in Iraq and Syria in March of this year around the town of Baghuz Fawqani along the Euphrates River. It marked the final collapse of a caliphate declared on 29 June, 2014. After a blistering and shockingly successful offensive that routed the U.S. supplied Iraqi military, ISIS once controlled approximately 100,000 square kilometres of territory across Iraq and Syria at its zenith, along with millions of people.

It also carried out devastating terrorist attacks across the Middle East and beyond, killing 6,141 people in 2015 according to the Global Terrorism Index. That year, ISIS terrorists killed 130 people in Paris and the year after, Brussels and Nice were also targeted. Excluding battlefield deaths inflicted on state and non-state combatants, ISIS killed 9,150 people in 2016, a toll which started to drop in line with increasingly successful efforts to defeat the group on the ground in Syria and Iraq.

One of the group's earliest and most important setbacks was its defeat in the Siege of Kobani, which is now considered a major turning point in its demise. The group's barbarity attracted the attention of the world's most powerful militaries with U.S. and Russian airpower helping to loosen its grip on its territorial conquests while local militias and security forces carried out of the bulk of operations on the ground.

When ISIS lost the city of Mosul, it was only a matter of time until the caliphate crumbled, something which was hastened by Kurdish forces subsequently capturing its de-facto capital of Raqqa. Despite the group's setbacks, it still managed to kill more than 1,300 people in terrorist attacks in 2018, a reminder that despite its rise and fall between 2013 and 2018, it very much remains a serious threat as the new decade begins. 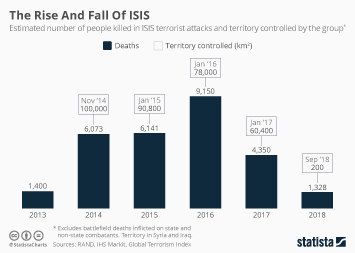 This chart shows the estimated number of people killed in ISIS terrorist attacks and territory controlled by the group.