Australia was named among several other countries made responsible for the outcomes of the Madrid climate summit, which UN secretary-general Antonio Guterres has called a “lost opportunity“. During the summit, which ended Sunday, Australia was among those resisting a new type of carbon credit system, known as Article Six, that would enable countries to carry out project reducing emissions in other countries and count the savings as their own.

The new agreement would have cancelled the carbon credits incurred under the old system, and a look at Australia’s carry-over balance makes apparent why the country blocked the change. Between two old climate agreements, the Kyoto protocol and the UNFCCC of 2012, Australia has almost met its goals under the Paris Agreement of 2015.

Out of 452 million tons of CO₂ equivalent that Australia pledged to save between 2020 and 2030, only 41 million tons remain after carry-over credits are subtracted. According to ABC News, Australia had a relatively easy time incurring those credits. Under Kyoto, the reduction of land clearing in Queensland offset emissions. In the second period, the goals Australia set were relatively low, resulting in a big balance of carry-over credits.

Australia received negative press in the past when data showing that emissions in the country were rising again, were released. The country is growing its natural resources and LPG industries, which are expected to add emissions to the country’s balance further on.

Recently, Australia released a new renewable energy target that is aimed to raise the share of green energy sources to 48 percent by 2030. Projections by the Department of Environment and Energy show that this would lead to a reduction of emissions of around 16 percent, short of the 26 percent promised in the Paris Agreement. 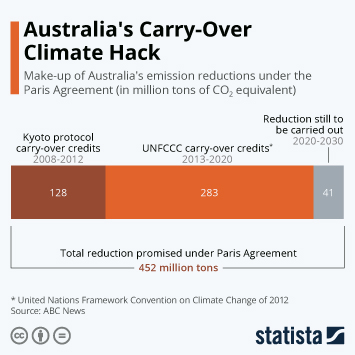 This chart shows Australia's balance of carry-over carbon credits compared to the country's emission reduction goals under the Paris Agreement (2019).