With news of the ongoing COVID-19 disease outbreak being more severe for older people, those 60 years and older could be at even greater risk without the support of family if they're living alone. Proper nutrition can be harder to maintain while living alone, and new symptoms from a flu or coronavirus can go unnoticed for longer periods of time.

Older Americans and Europeans are living alone at far greater rates than other areas of the world, showing further evidence that the extended family in Western countries is continuing to shrink.

According to a Pew Research Center analysis of census data between 2010 and 2018, only 7 percent of people aged 60 and older live in an extended family household in North America. Europe was only slightly higher with 16 percent. The world average was found to be 38 percent, and Sub-Saharan Africa and the Asia-Pacific region topped the survey with 51 percent and 50 percent, respectively.

North America and Europe also have the highest cases of people 60 years and older living alone, with 26 and 28 percent, respectively. The world average for older people living alone was found to be just 16 percent.

Data cited by Pew points to a couple of factors for why older people in Europe and North America tend to live alone as opposed to in extended families. According to Pew, households are generally smaller in more prosperous countries and families tend to have fewer children. This makes it easier and more affordable economically to live alone in one’s later years as opposed to poorer economies. Culturally, however, extended families are becoming less frequent in Western countries as opposed to the rest of the world. Religion plays a role in increasing the prevalence of an extended family, while unmarried or widowed women in Western countries tend to live alone at nearly double the rate of men. 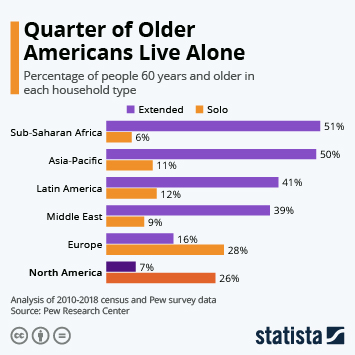 This chart shows the percentage of people 60 years and older in each household type across the world.