Published by M. Szmigiera, Jun 21, 2022
Economic indicators measure the economic activity within a country or economic region. They are usually collected at frequent intervals, often monthly or quarterly, and are usually weighted and indexed according to different criteria allowing for meaningful comparisons between different points in time. Generally economic indicators are divided into three categories: leading indicators, lagging indicators, and coincident indicators.
Leading indicators signal future changes and are therefore useful for making short-term predictions. Stock market indicators are a common example of leading indicators. Usually stock market returns will start to decline prior to an economy slipping into recession, and vice versa. Another such example is the difference between yields on ten-year and two-year U.S. Treasury bonds, which has proven to be a reliable predictor of recessions. A positive value indicates that investors prefer long-term investments and therefore are confident of future economic growth, while negative values signal a preference for short-term investments. This indicator returned negative values shortly before the recession of the early 1990s, the tech-bubble crash in 2000-2001, and the financial crisis of 2007-2008.

Finally, coincident indicators occur at about the same time as the changes they signal. Wages are often provided as an example of a coincident indicator. If the economy is strong and business is going well, personal income rates will increase at about the same time. However, the line between coincident and other indicators is sometimes blurred. GDP is considered by many to be a coincident indicator, not a lagging indicator, on the basis that it can be used to estimate current levels of economic activity. Others question this, pointing out that current GDP figures are estimates that are revised at some point in the future, which makes them much less accurate than values calculated for past time periods.

In the following 5 chapters, you will quickly find the 42 most important statistics relating to "Global economic indicators".

The most important key figures provide you with a compact summary of the topic of "Global economic indicators" and take you straight to the corresponding statistics. 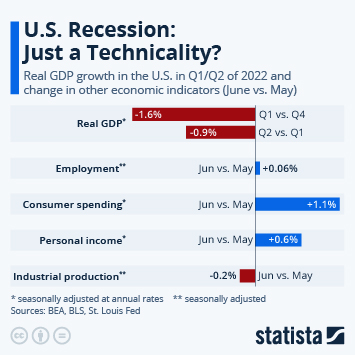 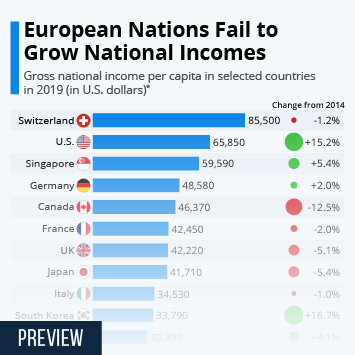