Demographics of the UK -Statistics and Facts

Published by D. Clark, Jul 26, 2021
There were approximately 67 million people living in the United Kingdom in 2020, making it the third-largest country in Europe , behind only Russia and Germany, and slightly ahead of France. Since 2000 there has been a net increase of almost 8.2 million people in the United Kingdom, with the country passing the 60 million mark in 2005. Between 2019 and 2020, however, the UK population grew by just 0.43 percent, which was the slowest rate since 2002. In 2020, women outnumbered men in the UK by approximately 789 thousand, although that gap was far greater in the past, such as in 1950 when there were almost two million more women than men.

Sub-divisions of the UK

The UK itself is composed of four different countries, with England having, by far, the largest population at 56.29 million, followed by Scotland at 5.46 million, Wales at 3.17 million, and Northern Ireland at 1.89 million. Within these countries, there are further sub-divisions, with England divided into nine regions, and then into 47 counties. Within Scotland, there are 32 different council areas, while Wales and Northern Ireland are divided into 22 unitary authorities, and eleven local government districts, respectively. By some distance, London is the biggest city in the UK, with a population of around nine million, which was more than three times greater than that of any other city in 2020.

As of 2020, the baby boomer generation, born between 1946 and 1964 were the largest generation in the UK, at just under 14.3 million. The high birth rates in the UK after World War Two, are responsible for the size of this generation, which experienced a postwar peak of 18.8 births per 1,000 population in 1964. By comparison, the birth rate in 2019 was just 10.7, which was also the lowest birth rate since at least 1938. There were just 712 thousand live births in the United Kingdom in 2019, around 18.5 thousand fewer than there were in the previous year. While there have also been significant long-term improvements in life expectancy, life expectancy improvements have also slowed since 2010.

In the following 4 chapters, you will quickly find the 34 most important statistics relating to "Demographics of the UK".

Statistics on the topic
Population of the UK
67m
Annual population growth of the UK
0.43%
Median age of the UK population
40.4 years

The most important key figures provide you with a compact summary of the topic of "Demographics of the UK" and take you straight to the corresponding statistics. 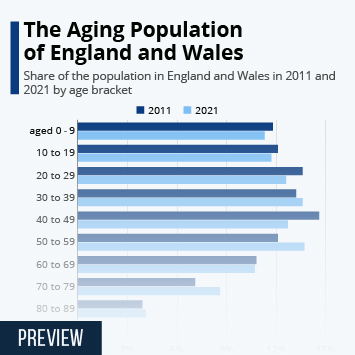 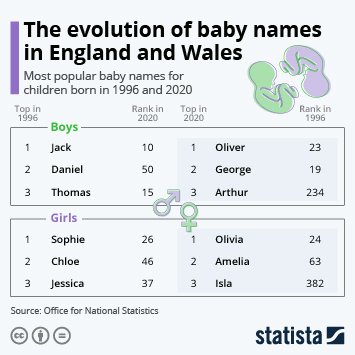