New waves of coronavirus infections are sweeping through several countries in Asia, many having become more ferocious than previous outbreaks. Especially the devastating outbreak in India, which has brought the country's health infrastructure to collapse, is capturing the world's attention.

India recorded almost 350,000 new cases Tuesday, after reaching an all-time global record of 414,000 on May 6. The average of daily new cases per million of population stood at 280 Monday. India's neighbor to the North, Nepal, was still seeing a steep growth of COVID-19 infections, which caused per-capita case burdens to outpace those of India from Sunday onward. Southern neighbor Sri Lanka became the fourth most affected major country in Asia, even though cases are growing a little slower there.

The Philippines recorded only around 4,700 new cases on May 11, according to Johns Hopkins University, down from a daily record of more than 15,000 cases set on April 2. Looking at new cases in relation to population, the Philippines remained the fifth most affected major country in Asia. The 7-day rolling average of new cases per one million of population stood at around 61 Saturday, behind approximately 99 new cases/million in Sri Lanka and 119 new cases/million in Malaysia.

COVID-19 model students Thailand and Laos have also seen more new cases than usual. New infections remained at stable levels in Indonesia, Singapore, South Korea and Pakistan, while heavy surges in Bangladesh and Cambodia appears to have been squashed. Japan was the sixth most affected country. Case numbers are rising once again ahead of the start of the Olympic Summer Games in the country. 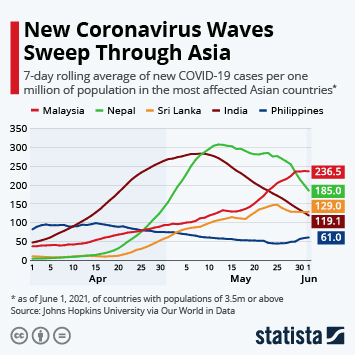 This chart shows the rolling 7-day average of new COVID-19 cases per one million of population in the most affected Asian countries (as of May 10, 2021).