The bad news regarding the spread of COVID-19 keeps flowing and its hard not to feel disheartened, depressed, disgruntled or just downright weary. Even in the early weeks of the pandemic, people all over the world latched onto whatever positives they could, whether it was the return of wildlife to eerily empty cities or the courage and tenacity of the healthcare workers on the frontlines of the pandemic. One key trend that has emerged and remained largely overlooked is the massive, swift and efficient transition most office workers made to continue doing their jobs from home. That has to remain one important change society keeps and indeed embraces when the world recovers and there are several reasons why.

As this infographic shows, there are a number of key reasons U.S. workers did their jobs away from the office in 2019. The data comes from the 2019 State of Remote Work Report from Owl Labs which found that better work life balance was the top reason, cited by 91 percent of respondents. 79 percent of those polled in the report said they have increased productivity or have better focus while 78 percent had a desire to avoid commuting. Saving money/financial reasons was also high up among the respondents and that could turn into a crucial factor when the world recovers from the coronavirus.

Of course, it has to be said that remote working is a luxury that isn't available to all workers but for those who can avail of it, the option could solve an array of serious and obvious problems in the coming years. Why would an employee working in an office in San Francisco or New York fork over the bulk of their paycheck in rent when they can also do the job perfectly well from a different location where living costs are lower? Of course, some people choose to live in such cities for personal reasons but many others have home ownership dreams that are impossible to realize.

Millennials have now been devastated by not just one but two "once in a lifetime" crises - the 2008 Financial Crisis and COVID-19. Increased trust in the workforce and an allowance to work from anywhere could lead to people moving out of the pricey cities and purchasing their own property in areas where they can actually afford it. Forget saving up for that $500,000 studio in the Bay Area and go rural where you can by a house for a fraction of the price (if your job allows it, that is).

Along with prompting people to move to smaller towns and villages, embracing the current remote working dynamic would allow for a more even distribution of wealth. The emergence of online meeting tools such as Zoom would still allow those remote workers to interact with managers and colleagues while they could also result in less business travel, yielding environmental benefits. Those benefits would be seen in cities especially where a considerable swathe of the morning rush hour would disappear, reducing pollution and relieving pressure on infrastructure. As serious as the current crisis is, a possible solution to several others might be right in front of us. 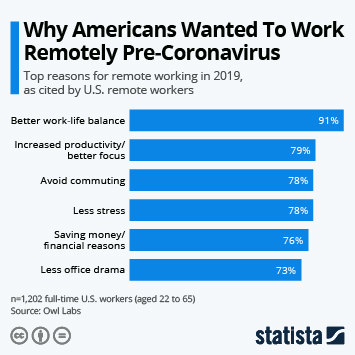 This chart shows the top reasons for remote working in 2019, as cited by U.S. remote workers.

Working From Home During Lockdown