If something sounds too good to be true, more often than not it isn’t. This seemed to be the case for the latest U.S. jobs report, which saw the unemployment rate unexpectedly drop on a surprise jobs gain in May. After people discovered a note in the Bureau of Labor Statistics’ official release, acknowledging a “misclassification error” that resulted in the reported unemployment rate being lower than it actually is, the hashtag #misclassificationerror started popping up on Twitter, with many people accusing the Trump administration of manipulating the numbers to paint a rosy picture of a bleak reality.

Considering how transparent the BLS handled the misclassification error from the start, it seems highly unlikely that any data was intentionally misrepresented. In its latest press release, the BLS explained the mistake as follows: 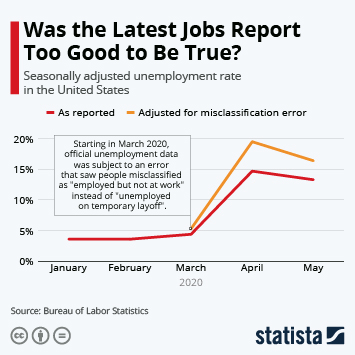 This chart shows the seasonally adjusted unemployment rate in the United States.