When you think of American Western musical scores, there’s only a few names that come to mind. The first is Aaron Copland, who pioneered the 20th century sound with his heroic, sweeping orchestral movements found in Appalachian Spring and Fanfare for the Common Man. The second name for many comes just as easily, with musical compositions for The Good, the Bad, and the Ugly and Cinema Paradiso being the most recognizable out of hundreds of other illustrious scores during a decades-long career.

Ennio Morricone, composer of more than 500 film scores over the course of roughly seven decades, died on Monday at the age of 91. He died in his hometown of Rome, Italy.

Born in 1928, Morricone began paving his career early as a child, learning the trumpet and composing music before he hit his teenage years. He would go on to become one of the greatest composers of the modern era, experimenting with unique sounds like coyote howls and gun shots to create unforgettable scores found in movies like The Good, the Bad, and the Ugly and Once Upon a Time in the West. He combined elements of traditional orchestral composing with pop music, turning seemingly standard spaghetti western films into instant classics.

His career in film certainly had him paired with legendary directors, including Brian de Palma, Sergio Leone, Quentin Tarantino and many others. Morricone could compose a unique sound for almost any occasion, whether it was a romantic, softer sound for the main theme of Leone’s Once Upon a Time in the West or his famouswhistling and wahing main theme from Leone’s outlaw film, The Good, the Bad, and the Ugly.

In 2004, famous cellist Yo-Yo Ma recorded a performance of some of Morricone’s most famous works. Of the famous composer, Ma has said that Morricone described music as “energy, space, and time.” He has a recording of the Morricone’s Love Theme from Cinema Paradiso on his Twitter. 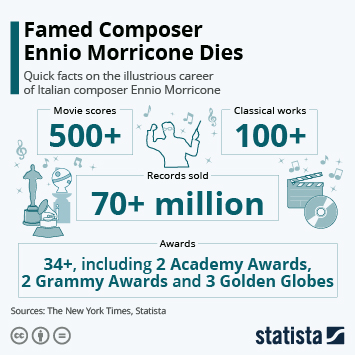 This chart shows some quick facts on the illustrious career of Italian composer Ennio Morricone.