Nike reported its fourth quarter results on Thursday, finishing the fiscal year that ended on May 31 with a flourish. The sportswear giant beat analyst expectations as fourth quarter sales grew 96 percent compared to the previous year and 21 percent compared to the fourth quarter of fiscal 2019, which is a better gauge of performance as last year's May quarter was heavily impacted by COVID-related store closures. Full year revenue was up 19 percent to $44.5 billion, while net income more than doubled to $5.7 billion. The results were once again driven by strong growth of Nike’s direct-to-consumer business, which saw sales increase by 32 percent for the full fiscal year, compared to 12 percent growth in sales to wholesale customers.

The latest results are a continuation of a longer-term trend that sees Nike, like other industry heavyweights, cut out the middle man and move more and more towards selling directly to consumers, at the expense of traditional retailers. As the following chart shows, the percentage of direct-to-consumer sales in total Nike brand sales more than doubled over the past decade, climbing from 15 percent in 2010 to 39 percent in fiscal year 2021. In the meantime, direct-to-consumer sales grew more than six-fold in absolute terms, from $2.5 billion in 2010 to $16.4 billion in 2021. The steep increase in direct sales is largely driven by sales across Nike's digital platforms, which accounted for 21 percent of Nike brand sales last year.

"FY21 was a pivotal year for Nike as we brought our Consumer Direct Acceleration strategy to life across the marketplace," John Donahoe, President & CEO of Nike said. Now approaching 40 percent, Nike aims for direct sales to represent 60 percent of its business by 2025, with the share of digital direct sales expected to double from 21 to around 40 percent. Earlier this year, Nike's largest competitor Adidas had announced a similar initiative called "Own the Game", under which the German sportswear giant plans to reach 50 percent direct-to-consumer sales by 2025. 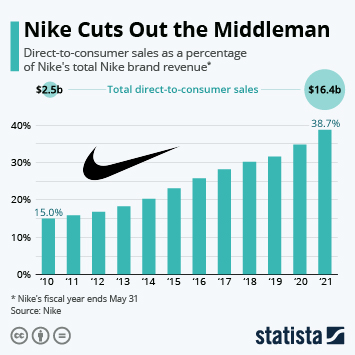 This chart shows direct-to-consumer sales as a percentage of total Nike brand revenue.