After days of uncertainty during the continued counting of votes in states like Pennsylvania, Georgia and Nevada, Joe Biden has officially been called as the 46th president of the United States by the Associated Press and most major media outlets.

Biden surpassed the 270 electoral votes needed to clinch the White House by securing Pennsylvania, with the current tally sitting at 290 and most major media declaring him the victor in other states like Nevada and Arizona. While states like Georgia and North Carolina are still too close to call, the leads in key swing states for Biden make it an enormous statistical improbability for Trump to secure 270 even with several state recounts. Assuming any recounts yield the same result and the current trends of voting in uncalled states continue, Biden is projected to end with 306 electoral votes and a popular vote lead of roughly 5 million – a decisive victory for the former vice president.

Trump and his campaign have refused to concede the election, going so far as to unsubstantially claim widespread election fraud in key states like Pennsylvania, Georgia and Michigan. While evidence to these claims has yet to be presented, most prominent Republican politicians are sticking with their president and refusing to acknowledge Biden as the new president-elect.

Biden’s victory speech on the evening of Nov. 7 focused on his goal for unity when he officially becomes president on Jan. 20. Despite a deep, growing political chasm between conservatives and liberals in the country, Biden stressed the importance of America as a singular country instead of red and blue states.

“Let this grim era of demonization in America begin to end here and now,” Biden said. “Refusal of Democrats and Republicans to cooperate with one another is not some mysterious force beyond our control. It’s a decision; a choice we make… I believe this is a mandate given to us by the American people. They want us to cooperate.”

Despite not taking office for another two months, Biden has already constructed a COVID-19 response task force to lead national efforts for combating the virus and distributing a potential vaccine. Along with rejoining the World Health Organization, Biden’s plans for his first day in office also include rejoining the Paris climate accord and enacting several executive orders undoing travel bans and restrictions on union workers. 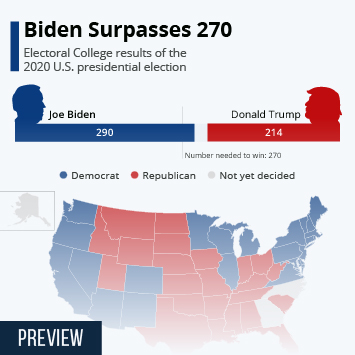 This chart shows the Electoral College results of the 2020 U.S. presidential election.