Published by Statista Research Department, Jun 21, 2022
Every four years Americans head to the polls to vote in a new president, and in 2020, it was no different. In normal times the divisive nature of the Trump Administration, which was in power between January 2017 and January 2021, led many to view the 2020 presidential election as being of higher stakes than elections in years past. The first half of 2020 saw two major crises – the coronavirus (COVID-19) pandemic and the widespread protests following the death of George Floyd – which gave the 2020 presidential election a particular sense of gravity. In the end, the election was won by Democratic candidate Joe Biden, who received 306 Electoral College votes, compared to the 232 Electoral College votes won by Donald Trump.

The issue that dominated the 2020 election campaign was the economic and social consequences of the global coronavirus pandemic. At the end of 2019, the United States’ economy was doing quite well, with unemployment falling to the lowest figure since 1990 and GDP growing steadily since 2016. However, with the economic lockdown caused by the COVID-19 pandemic, both of these core economic indicators fell at an unprecedented speed. GDP fell by 31.2 percent in the second quarter of 2020, while national unemployment increased more than threefold in April alone, reaching Great Depression levels of more than 20 percent in states. Traditionally, economic health is seen as a strong indicator as to how an incumbent president has been doing, making these figures very important to the Trump campaign. As of January 2021, a majority of Americans disapproved of the administration’s response, but this statistic belies the fact that disapproval is split on partisan lines, with Republicans overwhelmingly supporting the former president’s efforts.

Aside from economic issues, the protests sparked by the killing of African-American man George Floyd by police brought issues of race to the fore of the 2020 presidential election. Tension over questions of race have been a longstanding feature of the Trump administration, whose rhetoric and policies aroundimmigration were seen by many to problematically fuel the flames of racial division. Meanwhile, others embraced his more hardline tone on the issue, increasing the level of political polarization between Republicans and Democrats. For example, support for former President Trump’s attempts to build a wall along the Southern border was sharply divided on party lines. Additionally, Trump promoted the use of force (including the military) in his response to the protests, eschewing a more conciliatory approach which acknowledges the protestors’ concerns about racialized police violence. This was in sharp contrast to the Democratic candidate, Joe Biden, who publicly remarked that the protests were a result of structural racism and promised to address the issue should he become president.

The outcome of the election and January 6th

Throughout the campaign, Biden consistently maintained a lead over Trump in the polls, but despite this, the winner was not immediately clear on election night. The COVID-19 pandemic significantly changed the course of the election. Since going out to vote was risky due to the highly contagious transmission of the virus, many Americans opted to vote by mail, which further delayed election night results. Donald Trump used this opportunity to promote the belief that the election was a fraud, due to the high number of mail-in ballots, claiming the election was stolen. Nearly a third of survey respondents thought that a high level of voter fraud occurred in the election.

The high stakes and deeply partisan election caused 74 percent of survey respondents to say that they were worried there would be violence if Joe Biden won the presidential election. On January 6th, 2021, this is exactly what happened. On this day, Congress was in session to certify the electoral vote. A mob of Trump supporters, fueled by the former President’s claims that the election had been stolen by the Democrats, marched to the U.S. Capitol building in an attempt to convince Vice President Mike Pence and Congress to overturn Trump’s defeat. Many protestors breached police and Capitol security and entered the building, causing Congress to be evacuated and the certification process to be halted. Additionally, pipe bombs were found at both the Democratic and Republican National Committees. Police eventually cleared the Capitol building, and the certification was resumed. Support for these actions among the American populace was minimal, with condemnation highest among Democratic voters.

The result of the storming of the Capitol building resulted in former President Donald Trump being impeached by the House of Representatives for incitement of insurrection, making him the only president to have been impeached twice (the first impeachment taking place in December 2019, for abuse of power and obstruction of Congress). However, the U.S. Senate acquitted President Trump in a vote of 57 (guilty) to 43 (not-guilty), as 67 guilty votes are needed for conviction.

Following this, Joe Biden was successfully sworn in as the 46th U.S. president on January 20th, 2021. His Vice President, Kamala Harris, became the first female, first African-American, and first Asian-American Vice President on the same day.

In the following 6 chapters, you will quickly find the 47 most important statistics relating to "2020 Presidential Election".

The most important key figures provide you with a compact summary of the topic of "2020 Presidential Election" and take you straight to the corresponding statistics. 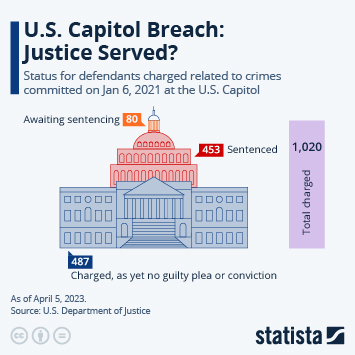 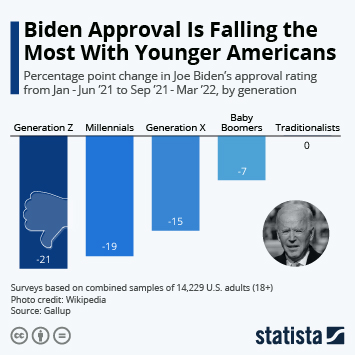 Biden Approval Is Falling the Most With Younger Americans