In the 2021 Eurovision Song Contest, around a third of all entries from the 39 participating countries contain a language other than English. Countries have been free to choose the language in which they sing since 1999 and after that date, many have opted for lingua franca English to get their message across to the international audience of the annual song competition, whose final is held in Rotterdam on Saturday. But, as a detailed analysis by blog Johnthego.com shows, winning titles in languages other than English have in the past inspired more countries to present a song in their native tongue.

In 2007, winning title Molitva ("Prayer") performed by Serbian Marija Šerifović was one of 36 percent of titles which featured languages other than English. In the following year, more than half of artists suddenly wanted to give a language other than English a go. But it was more likely Šerifović’s emotional performance and the song’s powerful choral chorus that earned her the title, since the following years’ focus did not earn another local-language song a title. Interest waned and reached a low of less than 20 percent of songs offering language variety between 2015 and 2017.

2016’s winner, 1944 by singer Jamala, contained some Ukrainian verses, but things only changed again after the surprise win of contestant Salvador Sobral with his quirky Portuguese ballad Amar Pelos Dois ("To Love for the Both of Us") in 2017. Language variety shot up again to 33 percent the next year, but again, non-English winning songs have not materialized since then.

Chances are good in this year’s final, however, as half of the 20 qualified performers feature languages other than English, meaning that an above-average numbers of local language songs have moved on from semi-finals.

Not included in the count is the trend of spicing English songs up with foreign language titles, like Cyprus’ El Diablo, Malta’s Je me Casse or San Marino’s Adrenalina. Serbia employs a similar tactic for its entry Loco Loco, which contains mostly Serbian, but mixes in Spanish and English.

The record for most languages featured in a single Eurovision song stands at four. Israel’s 2020 entry by singer Eden Alene featured Hebrew, English, Arabic and Amharic, a language from her parents’ home country of Ethiopia. The second Eurovision song containing four languages is also tied to Israel. Germany’s 1999 entry for the competition held in Jerusalem was sung in German, English, Turkish and Hebrew. 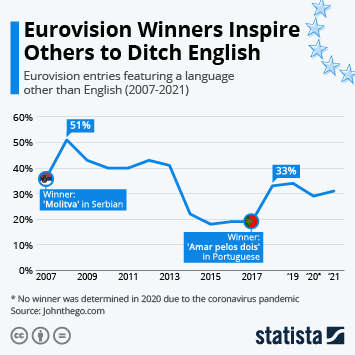 This chart shows the share of Eurovision entries featuring a language other than English (2007-2021).