In the wake of a historically bad year for movie theaters across the United States and Canada, the entire film industry is desperately looking for signs of recovery as box office sales remain subdued halfway through 2021.

The latest installment of the Fast & Furious franchise, F9: The Fast Saga, provided at least a glimmer of hope last week, setting a post-Covid record with a $70-million opening weekend across 4,179 theaters. While that doesn’t even put F9 among the 100 biggest opening weekends, it’s still a huge step in the right direction for the battered industry.

And while Adam Aron, CEO & President of AMC Theatres, celebrated the strong weekend performance in a press release, saying “the big screen is back”, before calling widespread vaccinations plus blockbuster movies “the magic formula for the return to moviegoing,” others are more cautious in their outlook for the industry that has been reeling since the pandemic hit in March 2020.

Arguably the biggest fear among industry insiders is the possibility that the pandemic only accelerated a downward trend that has in fact been going on for years, merely concealed by ever-rising ticket prices. Ticket sales data from industry tracking site The Numbers reveals a slow but steady downward trend in theater admissions since 2002, when 1.58 billion movie tickets were sold across the U.S. and Canada. By 2019, that number had dropped to 1.23 billion, all while box office earnings rose from $9.16 billion in 2002 to $11.26 billion in 2019.

One thing putting a question mark behind the hoped-for mass return to movie theaters is the softening of the exclusive theatrical release windows during the pandemic. The widespread concern is that once consumers have gotten used to enjoying the latest blockbusters in the comfort of their own home, it won’t be easy to get that particular genie back into the bottle. 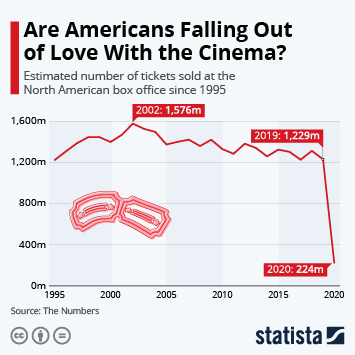 This chart shows the estimated number of tickets sold at the North American box office since 1995.