The number of newly created Twitter accounts almost tripled on the day Russia invaded Ukraine, according to a new report by the University of Indiana’s Observatory of Social Media (oSoMe) and the Polytechnic University of Milan. The whitepaper, titled “Suspicious Twitter Activity around the Russian Invasion of Ukraine”, reveals that more than 38,000 new accounts were created on February 24, the day Russian tanks rolled into Ukraine, up from just 13,500 the day before.

According to the report, several networks of accounts appear to have posted “suspiciously similar content” around the same time, including pro-Russian propaganda by inauthentic accounts. Campaigns on the Ukrainian side also appeared, with messaging asking the West to set up a no-fly zone and supporting other military escalations. But not all of it was related to the conflict. Researchers found that Ukraine-related keywords were also used to spread spam, including a cryptocurrency scam pretending to support the Ukrainian resistance.

Social media has become the latest frontier for war. When exploited and used to amplify the voices of bad actors and to spread false information, it can become a powerful tool for manipulating public opinion. This has already been seen in the Russia-Ukraine context, with Russian news organizations and government representatives propelling conspiracy theories that the Bucha massacre was a hoax, among numerous other falsehoods, as Politico reports.

oSoMe concludes, “With public attention focused on the tragic war, some see an opportunity to exploit social media to spread propaganda, spam, and scams.” Statista and oSoMe will continue to monitor the social media field as events unfold. 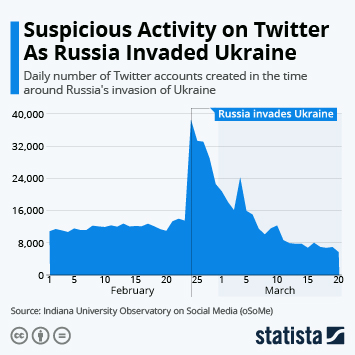 This chart shows how the number of newly created Twitter accounts almost tripled on the day Russia invaded Ukraine.