According to official data by Mexico's Comisión Nacional de Búsqueda overseen by the Interior Ministry, the number of currently disappeared people in the country surpassed 100,000 in the latest update. Combined with figures from a report by the Jesuits' Missing Migrant Search Program that suggests a minimum of 349 foreigners disappeared in Mexico in 2021 alone, most likely due to drug cartel activity, the picture becomes even grimmer. Although these numbers are staggering, the migration route from Central America to the U.S. is far from the most dangerous when viewed from a global perspective.

As our chart based on the International Organization for Migration (IOM) analysis shows, at least 24,023 people were killed between 2014 and May 15, 2022 while trying to cross the Mediterranean. This large number can be attributed to widespread migration movements in 2015 and 2016. Those two years alone were responsible for 38 percent of total migrant deaths on this route between 2014 and 2022. The number of deaths occurring while crossing the Sahara Desert, which accumulated to 5,323 in the past eight years, is tangentially related to these movements as well. Deaths connected to border crossings between the U.S. and Mexico amounted to 3,761 between 2014 and 2022.

These numbers, however, are not reflective of the total and rather show the minimum estimate aggregated from cases reported by connected governments, media outlets and NGOs as well as surveys of migrants and, in some regions, field missions by the IOM itself.

The IOM's methodological scope encompasses "the deaths of migrants who die in transportation accidents, shipwrecks, violent attacks, or due to medical complications during their journeys. It also includes the number of corpses found at border crossings that are categorized as the bodies of migrants, on the basis of belongings and/or the characteristics of the death." Deaths in detention, refugee camps or housing, after deportation and of internally displaced people are excluded. 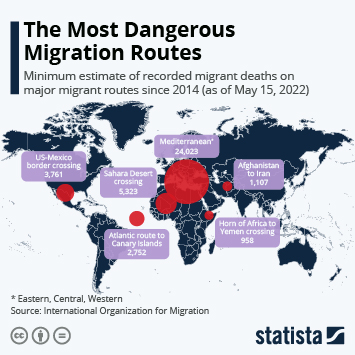 This chart shows the minimum estimate of recorded migrant deaths on major migrant routes since 2014.