At least 1,000 people were killed in a 5.9 magnitude earthquake near Afghanistan’s border with Pakistan late Tuesday night (June 21), according to media reports and the U.S. government’s National Centers for Environmental Information (NCEI). As our chart shows, the quake was the deadliest the country has seen in two decades. In 2002, the twin earthquakes in the Hindu Kush mountain range were reported to have killed a total of 1,100 people. Prior to that, the country’s deadliest earthquake was in Takhar in 1998, and killed 4,700 people. The region had been hit only three months earlier by an earthquake measuring 5.9 on the Richter scale, which is reported to have claimed the lives of between 2,300 and 4,000 people, according to the NCEI. Fatalities have been counted not only in Afghanistan, but also in neighboring Pakistan and Iran and India.

As our chart shows, earthquakes are not unknown to the region. This is because the country sits at the meeting point of the Arabian, Indian and Eurasian tectonic plates. As the plates move past each other, friction can build up, and when it becomes too great, jolts and causes the earth to move. The proximity of the earthquake’s epicenter to towns and cities, impacts the scale of damage and death rate. Tuesday’s earthquake was near the southeastern city of Khost, in a mountainous and fairly remote region. According to officials, the terrain and weather have hampered rescue efforts.

Afghanistan is currently in the throes of a severe economic crisis, as many countries imposed sanctions on the country’s banking sector and cut development aid following the Taliban’s takeover in August 2021, as reported by Reuters. Aid from international agencies such as the UN has continued. 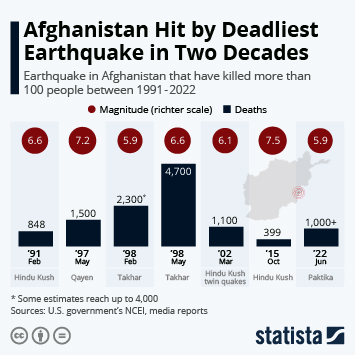 This chart shows the deadliest earthquakes in Afghanistan between 1991 - 2022.