Covid cases are on the rise once more in Europe, with numbers of recorded infections having tripled in just six weeks, according to the World Health Organization (WHO). The latest figures show that nearly 3 million new people had contracted the disease in the agency’s defined European region between 11-17 July. This makes up nearly half of all the new cases globally. National authorities reported there had been 3,950 new deaths that week, 90.5 percent of which were people aged 65 or older.

Omicron is driving the latest surge of infections, with its BA.2 and BA.5 strains proving to be highly transmissible. The fact travel has opened up once more and people are again attending large concerts and festivals is also linked to the rise in numbers, as reported by Bloomberg. With more Covid cases, the number of hospital admissions has also doubled. Fortunately, however, the number of patients in intensive care has remained fairly low, signaling that this wave is on the whole less deadly.

According to the WHO, many countries are starting to change their testing strategies, whether that’s by monitoring vulnerable groups in particular or focusing on the more severe cases. This will be important to keep in mind for the future, as lower testing will mean lower numbers being reported.

In light of the new data, the WHO warns that hospitalizations will likely rise further in autumn and winter, as schools start up again, people return from holidays, and socializing moves indoors with the colder weather. This will place more pressure on already overburdened healthcare systems across the region. To get ahead of the curve, the UN organization is calling for an increased vaccine uptake, as well as to promote mask wearing and to administer a second booster dose to people who are at risk - whether those who are immunocompromised, or other at-risk groups - at least 3 months after their last dose. 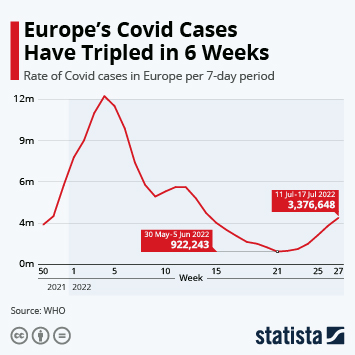 This chart shows how European Covid cases are on the rise once more in the summer of 2022.