Skip to main content
53k
74.6k
87k
88.9k
Guess you’d like to know who will be the next president of the United States, even before voters head to the actual polls in November!? Well, there’s an (almost) dead sure way of predicting whose going to make the White House in November. Amazingly enough it has to do with sticky dough.

Ever since 1992, there has been a contest between the spouses of the men who wanted to be elected president, conducted by the magazine Family Circle. This year’s so-called Presidential Cookie Poll will be contested by Melania Trump, who has entered the race with a recipe for star cookies, and the Clinton family, who have pitched a recipe for the classic chocolate chip.

Hillary’s Bill could actually become the first ever male first spouse, but he obviously didn’t want to go it alone, so he dragged the whole family into the cookie contest. And the chocolate chips are a pretty safe bet too: Hillary pitched versions of this recipe twice, in the run up to the 1992 and the 1996 elections. She defeated both Barbara Bush and Elizabeth Dole and moved in to the White House with Bill.

Casting your baking ballot is as simple as a piece of cake really. Check out the Family Circle’s Facebook page and exercise your patriotic duty by liking the photo of your favourite cookie. Well informed voters will of course have tried both recipes themselves before voting. Polls for the presidential cookie contest are open until October 4th.

Be sure to show some taste!

As our presidential cookie chart shows, all but one winner went on to live in the White House. 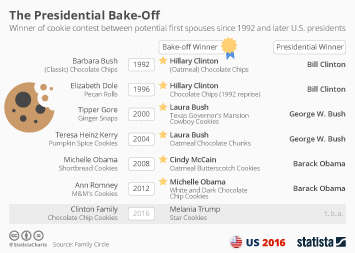 This chart shows the winners of the presidential cookie contest and consecutive US presidents since 1992.