88.9k
After a six week trial and more than one and a half years after the deal was initially announced, a federal judge approved the $85 billion takeover of Time Warner by AT&T. The ruling, which doesn’t require AT&T to divest any Time Warner assets, is a major loss for the Department of Justice, which had sued against the merger in November 2017, arguing that it would harm competition and result in higher prices for consumers.

Back in October 2016, when the deal was originally announced, President Trump, then presidential candidate, had spoken out against the mega-merger, vowing that his administration would not allow it. "As an example of the power structure I'm fighting, AT&T is buying Time Warner and thus CNN, a deal we will not approve in my administration because it's too much concentration of power in the hands of too few," he said at a public address in Gettysburg, Pennsylvania at the time. Judge Richard Leon didn’t buy into that argument though, ruling that “the government has failed to meet its burden of proof to show that the merger is likely to result in a substantial lessening of competition".

While AT&T applauded the court’s decision and announced that the deal would be closed within the next week, many experts see the ruling as groundbreaking as it is set to pave the way for future vertical mergers in the media and telecommunications industry. Comcast has already entered into a bidding war with Disney to acquire parts of 21st Century Fox, in an attempt to counter AT&T’s newly acquired media assets. 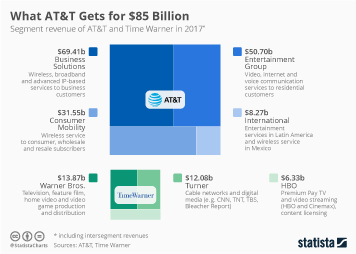 This chart shows the revenue of AT&T and Time Warner in 2015 by business segment.