Conventional wisdom says that competition is usually a good thing for customers as it keeps companies from raising prices and encourages them to improve their product. There can be too much of a good thing, however, especially when exclusivity comes into play.

Imagine a food market that offers an amazing all-you-can-eat ticket for $20, including everything from pizza to pasta, burgers, steak, sushi and plenty of dessert options. There‘s no competition between individual booths, but your tummy is full and you‘re happy. Now imagine every booth charging $12.99 for unlimited access to its own offerings but nothing else. All-you-can-eat pizza for $12.99 sounds good, but what if you want to start things off with a little pasta? You‘d have to shell over another $12.99 and probably another $5 or so for some ice cream afterwards. Competition has made your dinner more expensive.

The same is currently happening in the video streaming market, where Netflix used to be the closest thing to an all-you-can-eat buffet we‘ll ever get. Over the past two years, the streaming landscape has become increasingly fragmented, with almost every media conglomerate now offering its own streaming service with exclusive access to (at least parts of) its respective content library. Discovery became the latest media giant to launch its own streaming service this week. Discovery Plus was launched on Monday in the United States backed by the company's extensive catalog of reality TV shows and documentaries.

While the music industry has largely moved away from releasing music exclusively on one streaming platform, the TV/film industry appears to move in the opposite direction. With Disney, AT&T and Comcast now all competing with Netflix (and ViacomCBS soon to follow), the video streaming landscape is more fragmented than ever, and consumers face the tough choice of which service(s) to subscribe to. 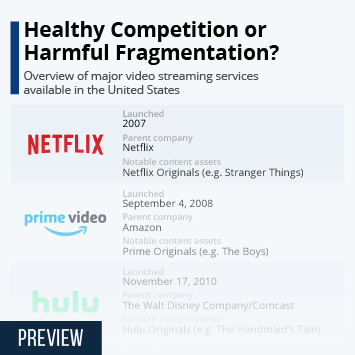 This chart provides an overview of major video streaming services available in the United States.