AT&T Inc. is a multinational telecommunications company headquartered in Dallas, Texas. Alongside Verizon Communications, it is one of the largest telecommunications operators in the United States. In 2021, the company generated over 168 billion U.S. dollars in revenue. That year the company employed approximately 203 thousand people.
Starting as Southwestern Bell Corporation, following the breakup of the AT&T Corporation monopoly in 1983, the company later renamed itself SBC Communications Inc. In 2005, SBC purchased its former parent, AT&T Corp., taking on both its name and branding.

Within the U.S. wireless segment, AT&T continues to lead the pack, sitting above Verizon and T-Mobile US in terms of revenue. AT&T had a subscriber base of approximately 81.5 million postpaid and 19 million prepaid customers in 2021. AT&T's monthly postpaid churn rate remains one of the lowest in the industry, sitting at just 0.94 percent. In terms of monthly average revenue per user (ARPU), AT&T generates around 50 U.S. dollars per postpaid user per month.

In 2021, the brand value of AT&T was estimated to be around 100.65 billion U.S. dollars, making it the most valuable telecommunications brand in the world.

AT&T are well positioned to provide a 5G service to customers, with the second largest 5g network in terms of physical coverage as of 2021. In tests conducted during 2020, AT&T also achieved the second fastest 5G download speeds, but the fastest overall mobile downloads.
This text provides general information. Statista assumes no liability for the information given being complete or correct. Due to varying update cycles, statistics can display more up-to-date data than referenced in the text.
Published by S. O'Dea, Jun 27, 2022

Number of wireless subscribers in the United States
498.91m 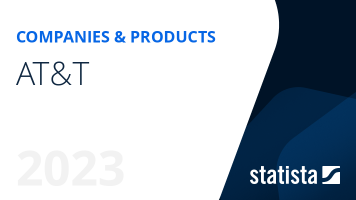 The most important key figures provide you with a compact summary of the topic of "AT&T" and take you straight to the corresponding statistics.